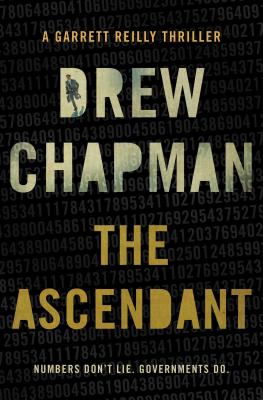 “A ruthless entity has declared war on America, not through military attacks or terrorist activities but by targeting our economy. Two hundred billion dollars in U.S. Treasury bonds are sold off, precious natural resources are destroyed, our power grid is sabotaged, and the real estate market is gutted when property is sold for cutthroat prices. Only one man, Garret Reilly, a trading prodigy who has an uncanny ability to recognize patterns, has a sense of what is being perpetrated and who is behind it. Chapman has created a brilliant, gripping thriller that is all the more frightening in its distinct possibility!”
— Jerry Brown, The Bookstore, Radcliff, KY
View the List

“Warfare goes digital in movie and TV writer Drew Chapman’s fast-moving debut, a high-stakes thriller that pits the online might of China against that of the United States” (Publishers Weekly) as reluctant patriot Garrett Reilly races around the globe to avert total war.

Numbers don’t lie…Not according to Garrett Reilly who, just two weeks past his twenty-sixth birthday, thinks he’s probably the best bond analyst at his brokerage, maybe the best in all of lower Manhattan. Garrett’s memory for numbers is photographic. But he doesn’t just memorize numbers: he sorts them, ranks them, senses patterns.

As he watches buy and sell numbers float across his computer monitor, Garrett notices what nobody else can: that US Treasury bonds are being sold off at an alarming rate. Two hundred billion dollars worth. It’s a discovery that Garrett knows will make him stinking rich.

But then the US military arrives at his office and Garrett’s life is thrown into free fall. Captain Alexis Truffant explains that Garrett has stumbled on something bigger and scarier than he could have ever imagined: the first attack in a covert war of unthinkable proportions. Garrett begins to link a series of seemingly unrelated—and very dangerous—events that start in New York, but continue to Las Vegas, Oregon, and all lead back to rural China. Suddenly, Garrett is the only one left standing between an unknown enemy and the very security of our country. The only problem? Numbers don’t lie…but sometimes governments do.

“The Hunt for Red October meets Hackers…Ascendant is a must-read for international thriller fans” (Booklist, starred review). “This is a wild ride through the headlines of our times” (Kirkus Reviews).

Praise For The Ascendant: A Garrett Reilly Thriller…

“Like his intriguing protagonist Garrett Reilly, author Drew Chapman possesses startling skills and this first novel just blows the doors off. The Ascendant is a rollicking, globe-hopping, timely and prescient page-turner—a Twenty-First Century thriller that once begun refuses to yield or loosen its grip on the reader. A stunning debut.”
—C.J. Box, New York Times bestselling author of Breaking Point

“Political thriller? International thriller? Financial thriller? Whatever you call it, The Ascendant is smart, edgy, fast-paced storytelling at its best. Its unlikely hero, Garrett Reilly, reminded me of a young Jack Reacher as a tech-savvy bond analyst. Drew Chapman is a debut novelist to watch.”
—Alafair Burke, bestselling author of If You Were Here

“From its first page, The Ascendant pulls you into a compellingly suspenseful story, and delivers it at a break-neck pace. Drew Chapman demonstrates the assured hand of an author on his twentieth novel, not his first. I couldn’t put it down!”
—Alex Grecian, New York Times bestselling author of The Yard

"Fans of Homeland and 24 will love The Ascendant—a rocket of a thriller that's fresh and cool and totally real." —Joseph Finder, New York Times bestselling author of Paranoia and Buried Secrets

"Chapman writes one great thriller, pulling together parallel storylines and levels of mystery. This is a wild ride through the headlines of our times."
—Kirkus

“There is a genuine thrill for readers when a debut novel hits a perfect bullseye…a new and fascinating spy/action thriller with all the suspense of a battle as exciting as a World War II tale but done through the weapons of laptops and smartphones by a motley crew of highly talented misfits.”
—Lincoln Star Journal

“Reilly’s reluctance to help fight off these attacks adds to the edginess of this page-turner that seems frighteningly realistic as Chapman uncovers new parameters for how war might be waged in our brave new world.”
—American Way Magazine

"Drew Chapman has created a twenty-first century superhero in The Ascendant. A must-read for the internet cognoscenti, it updates the thriller to groundbreaking territory. Garrett Reilly is a genius who can think, process, and react faster than everyone else ever has. And he has to because the country's welfare hangs in the balance. The Ascendant is an intense and relevant thriller; you'll feel like you're reading tomorrow's headlines today."
—Howard Gordon, executive producer of 24 and Homeland

Drew Chapman has written on numerous studio movies. He also directed the indie film Standoff. Currently, he creates and writes TV shows for network television, most recently working on the TNT spy show Legends. Married with two children, Chapman divides his time between Los Angeles and Seattle.
Loading...
or
Not Currently Available for Direct Purchase