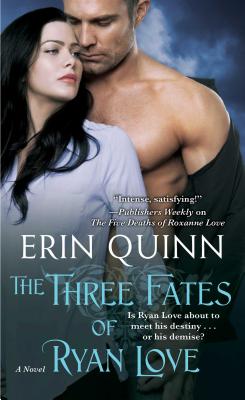 The Three Fates of Ryan Love (The Beyond Series #2)

Two star-crossed souls discover that their fates are intertwined—for better or worse—in the second book in the Beyond series of paranormal romances that began with The Five Deaths of Roxanne Love.

Ryan Love’s life is about to go up in flames—literally—when a mystical being named Sabelle appears, claiming to be from the Beyond—the realm of heaven, hell, and mysteries both awesome and terrifying. As Ryan’s family business and home are destroyed in a freak explosion, Sabelle saves him just in time. So why does Ryan feel like she’s the one who needs saving? He wants to resist this dangerous attraction, but how can he fight a fate this tempting?

Sabelle is a powerful oracle who has broken the laws of the Beyond to save Ryan’s life, but once she meets Ryan, everything changes. Ryan steals her heart and awakens her passions, making her long to be human. But corruption is seeping out of the Beyond and Sabelle must choose between saving the fate of mankind and following her heart. Is she Ryan’s fate or the destiny he won’t survive?

"A Love Worth Travelling to Hell and Back...THE THREE FATES OF RYAN LOVE Is in One Word - Amazing!"
— Fresh Fiction

Erin Quinn writes dark paranormal romance for the thinking reader. Her books have been called “riveting,” “brilliantly plotted,” and “beautifully written” and have won, placed or showed in the RWA RITA Award, Booksellers Best, WILLA Award for Historical fiction, Readers Crown, Award of Excellence and many more. Go to ErinQuinnBooks.com for more information or follow Erin Quinn Author on social media.
Loading...
or
Not Currently Available for Direct Purchase