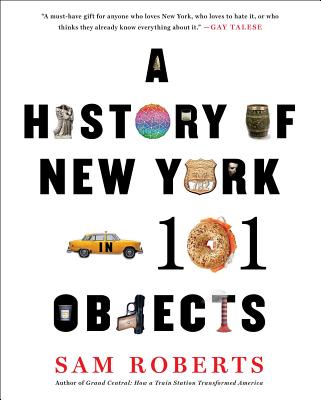 A History of New York in 101 Objects (Hardcover)

The vibrant story of America’s great metropolis, told through 101 distinctive objects that span the history of New York, all reproduced in luscious, full color.

A wooden water barrel and an elevator brake. A Checker taxicab and a conductor’s baton. An oyster and a mastodon tusk. Inspired by A History of the World in 100 Objects, The New York Times’ Sam Roberts chose fifty objects that embody the narrative of New York for a feature article in the paper. Many more suggestions came from readers, and so Roberts has expanded the list to 101. Here are just a few of what this keepsake volume offers:

· The Flushing Remonstrance, a 1657 petition for religious freedom that was a precursor to the First Amendment to the Constitution.
· Beads from the African Burial Ground, 1700s. Slavery was legal in New York until 1827, although many free blacks lived in the city. The African Burial Ground closed in 1792 and was only recently rediscovered.
· The bagel, early 1900s. The quintessential and undisputed New York food (excepting perhaps the pizza).
· The Automat vending machine, 1912. Put a nickel in the slot and get a cup of coffee or a piece of pie. It was the early twentieth century version of fast food.
· The “I Love NY” logo designed by Milton Glaser in 1977 for a campaign to increase tourism. Along with Saul Steinberg’s famous New Yorker cover depicting a New Yorker’s view of the world, it was perhaps the most famous and most frequently reproduced graphic symbol of the time.

Unique, sometimes whimsical, always important, A History of New York in 101 Objects is a beautiful chronicle of the remarkable history of the Big Apple that will enrich your mind and rekindle memories.

Sam Roberts is urban affairs correspondent for The New York Times. He is the host of The New York Times Close Up, an hour-long weekly news and interview program on cable channel NY1 that he inaugurated in 1992. He is the author or editor of eight previous books, including a new edition of The Brother. He lives in New York City. Follow @ObjectsofNYC or visit ObjectsofNYC.com.

Praise For A History of New York in 101 Objects…

“Sam Roberts’s lively, entertaining book—A History of New York in 101 Objects—not only serves as an original and knowledgeable guide to the history of New York but reminds us of why we continue to love and treasure this endlessly fascinating city.”
— Francine Prose

“Lively and deftly written, full of surprising tidbits and enticing illustrations, a total treat, this book contains the Rosetta Stone of New York identity. Who better than our maven of the five boroughs, Sam Roberts, to have compiled it?”
— Phillip Lopate

“Sam Roberts’ A History of New York in 101 Objects is a delight, not only for anyone—like me—old enough to have ridden in a Checker cab, used a subway token, or to still crave a black-and-white, but for all those who love the city, past and present, and revel in exploring its mysteries and hidden treasures.”
— Kevin Baker

“Sam Roberts has given us a wonderful object lesson in the rich, irreducibly concrete history of New York – or rather a hundred and one of them: a list large enough to start and avoid innumerable happily heated arguments – small enough to hold in the heart and mind – and of course the smallest number that still means inexhaustible. Personal favorite: a faded green ticket for Abraham Lincoln’s watershed campaign speech at Cooper Union on February 27th, 1860.”
— Ric Burns

“A must-have gift for anyone who loves New York, who loves to hate it, or who thinks they already know everything about it.”
— Gay Talese

“A portable virtual museum. . . . An entertaining stroll through the history of one of the world's great cities. . . . Delightfully surprising.”
— Kirkus Reviews
or
Not Currently Available for Direct Purchase
Copyright © 2020 American Booksellers Association