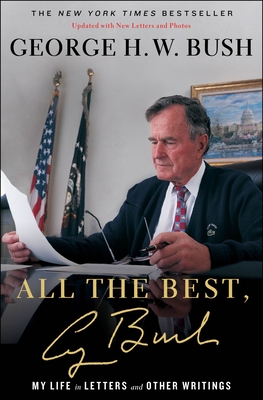 All the Best, George Bush

My Life in Letters and Other Writings

Though reticent in public, George Bush openly shared his private thoughts in correspondence throughout his life. This collection of letters, diary entries, and memos is the closest we’ll ever get to an autobiography.

Organized chronologically, the volume begins with eighteen-year-old George’s letters to his parents during World War II, when, at the time he was commissioned, he was the youngest pilot in the Navy. Readers will gain insights into Bush’s career highlights—the oil business, his two terms in Congress, his ambassadorship to the U.N., his service as an envoy to China, his tenure with the Central Intelligence Agency, and of course, the vice presidency, the presidency, and the post-presidency. They will also observe a devoted husband, father, and American. Ranging from a love letter to Barbara and a letter to his mother about missing his daughter, Robin, after her death from leukemia to a letter to his children two weeks before Nixon’s resignation to one written to them just before the beginning of Desert Storm, the writings are remarkable for their candor, humor, and poignancy.

This new edition includes new letters and photographs that cover the last fifteen years, highlighting the Bush family’s enduring influence on history and including letters that cover topics such as George W. Bush’s presidency, 9/11, Bush senior’s work with President Clinton to help the victims of natural disasters, and the meaning of friendship and family.

All the Best, George Bush provides a memorable, surprisingly intimate, and insightful portrayal of the forty-first president of the United States.

Praise For All the Best, George Bush: My Life in Letters and Other Writings…

“Who knew that beneath George Bush’s buttoned-up propriety pulsed the warm heart of a prolific and occasionally poetic writer with wacky sense humor?"
— People

"Worth it's weight in gold....the new edition of “All the Best” is a valuable update of the life of an honorable American leader. It captures the reflections of a man who has scaled the highest mountain of political success — then moved beyond ambition and discovered peace and fulfillment in simpler things in life: his friends, his family and a genuine love of the country he once led."
— Washington Post

"Bush's collected letters in this book offer readers not only a better understanding of Bush as president, politician, diplomat, and head of the CIA, but also his thoughts and feelings as a father and husband, thanks to the many personal letters that are included."
— Christian Science Monitor

George H.W. Bush, forty-first president of the United States (1989-1993), is the author of Speaking of Freedom, a collection of his speeches and coauthor with Brent Scowcroft of the critically acclaimed 1998 book A World Transformed. Born in 1924, he died in 2018 at the age of ninety-four.
Loading...
or support indie stores by buying on