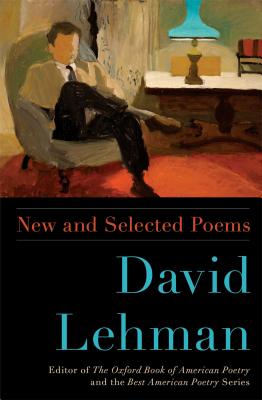 A major collection of poems from one of our most accomplished poets, the prominent man of letters behind The Best American Poetry series.

Drawing from a wealth of material produced over the course of more than forty years, David Lehman’s New and Selected Poems displays the remarkable range of his poetic genius. A gathering of stunning new poems, prose poems, and translations from modern French masters ushers in the book. Selections from each of Lehman’s seven full-length books of poetry follow and are capped off by a coda of important early and previously uncollected works. Lehman writes poems that captivate as they stimulate thought, poems that capture the romance, irony, and pathos of love, and poems that are lyrical and lovely in unexpected, sometimes even comic ways. This is David Lehman at his best.

Praise For New and Selected Poems…

“David Lehman is a true literary man…Poems such as “Mother Died Today” mark the development of his style from a more accessible, straightforward poetry with narrative and storytelling, to a more experiment, mashy style of contemporary poetry, often engaging in dialogue with other works of art.”
— The Literary Man

“[New and Selected Poems] places the poems themselves as center stage: they steer an entertaining, zigzag path between nonchalant Jewish-American autobiography and whimsical experiment. Lehman shows a genius for comic one-liners, for the humor at the root of pathos and the pathos inside tragedy.”
— Publishers Weekly (starred review)

David Lehman, the series editor of The Best American Poetry, is also the editor of The Oxford Book of American Poetry. His eleven books of poetry include The Morning Line, Playlist, Poems in the Manner Of, New and Selected Poems, When a Woman Loves a Man, and The Daily Mirror. The most recent of his many nonfiction books is One Hundred Autobiographies: A Memoir. He lives in New York City and Ithaca, New York.
Loading...
or
Not Currently Available for Direct Purchase