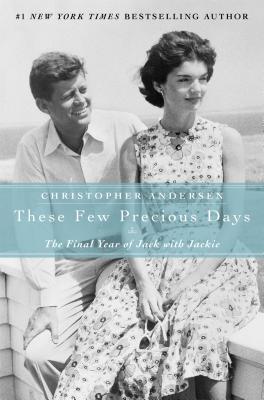 The Final Year of Jack with Jackie

The New York Times bestselling author presents the most famous couple in the world in their last year together, answering lingering questions about this still-mesmerizing marriage.

“The days dwindle down, to a precious few . . .” —from “September Song,” JFK’s favorite

They were the original power couple— outlandishly rich, impossibly attractive, and endlessly fascinating. Now, in this rare, behind-the-scenes portrait of the Kenne­dys in their final year together, #1 New York Times bestselling biographer Christopher Andersen shows us a side of JFK and Jackie we’ve never seen before. Tender, intimate, complex, and, at times, explosive, theirs is a love story unlike any other—filled with secrets, scandals, and bomb­shells that could never be fully revealed . . . until now. Including:

· The president’s many premonitions of his own death, and how he repeatedly tried to pull out of his last fateful trip to Dallas

· Shocking revelations about how the couple, unaware of the dangers, became dependent on amphetamine injections, the real reason— according to his longtime personal physician— for JFK’s notorious libido, and how the White House hid his many serious medical problems from the public

· Touching firsthand accounts of the family’s most private moments, before and after the assassination

Drawing on hundreds of interviews conducted with the Kennedys’ inner circle—from family members and lifelong friends to key advisors and political confidantes—Andersen takes us deeper inside the world of the president and his first lady than ever before. Unsparing yet sym­pathetic, bigger than life but all too real, These Few Precious Days captures the ups and downs of a marriage, a man, and a woman, the memories of which will continue to fascinate and inspire for generations to come.

Praise For These Few Precious Days: The Final Year of Jack with Jackie…

“The opening chapter alone is one of the most graphic, searing things I’ve ever read.”
— Liz Smith

"Breaks new ground in its portrayal of the president’s love affairs."
— The Daily Caller

“Andersen has a real track record when it comes to celebrity bios. . . . He looks at Jack and Jackie Kennedy during their final year, pondering aloud whether after all the triumphs and betrayals they still loved each other.”
— Library Journal

“Andersen digs beneath the surface . . . to examine the essential loneliness of both Jack and Jackie, both the products of privilege, both essentially abandoned, and both tough and independent.”
— Kirkus

Christopher Andersen is the critically acclaimed author of eighteen New York Times bestsellers which have been translated into more than twenty-five languages worldwide. Two of his books—The Day Diana Died and The Day John Died (about JFK Jr.)—reached #1. A former contributing editor of Time and longtime senior editor of People, Andersen has also written hundreds of articles for a wide range of publications, including The New York Times, Life, and Vanity Fair. Andersen has appeared frequently on such programs as Today, Good Morning America, NBC Nightly News, CBS This Morning, 20/20, Anderson Cooper 360, Dateline NBC, Access Hollywood, Entertainment Tonight, Inside Edition, 48 Hours, and more.
Loading...
or
Not Currently Available for Direct Purchase