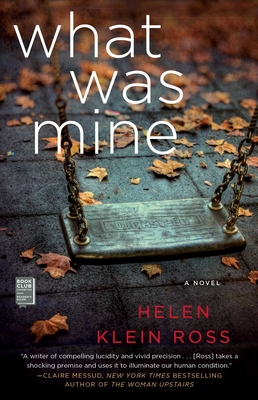 “A suspenseful, moving look at twisted maternal love and the limits of forgiveness.” —People

“Not only a terrific, spellbinding read but a fascinating meditation on the choices we make and the way we love.” —Elin Hilderbrand, New York Times bestselling author

Simply told but deeply affecting, in the bestselling tradition of Alice McDermott and Tom Perrotta, this urgent novel unravels the heartrending yet unsentimental tale of a woman who kidnaps a baby in a superstore—and gets away with it for twenty-one years.

Lucy Wakefield is a seemingly ordinary woman who does something extraordinary in a desperate moment: she takes a baby girl from a shopping cart and raises her as her own. It’s a secret she manages to keep for over two decades—from her daughter, the babysitter who helped raise her, family, coworkers, and friends.

When Lucy’s now-grown daughter Mia discovers the devastating truth of her origins, she is overwhelmed by confusion and anger and determines not to speak again to the mother who raised her. She reaches out to her birth mother for a tearful reunion, and Lucy is forced to flee to China to avoid prosecution. What follows is a ripple effect that alters the lives of many and challenges our understanding of the very meaning of motherhood.

Author Helen Klein Ross, whose work has appeared in The New Yorker, weaves a powerful story of upheaval and resilience told from the alternating perspectives of Lucy, Mia, Mia’s birth mother, and others intimately involved in the kidnapping. What Was Mine is a compelling tale of motherhood and loss, of grief and hope, and the life-shattering effects of a single, irrevocable moment.

Praise For What Was Mine: A Book Club Recommendation!…

"What Was Mine is an emotionally-grounded read...By giving readers the chance to examine what may be unforgivable, Ross brings an entirely new twist to the usual abduction story. Fans of Gillian Flynn and Maria Semple will enjoy the intensely introspective What Was Mine."
— Booklist

“A compelling and moving story that asks many questions about family, love, and justice… Moving at a hard-to-put-down, breathless pace, this is suspenseful fiction at its best.”

“Helen Klein Ross has written a truly brilliant book. I’m obsessed by the change this book made in my thinking of what is, and what is not, forgivable.”
— Abigail Thomas, New York Times bestselling author of A Three Dog Life

“A suspenseful, moving look at twisted maternal love and the limits of forgiveness.”

"Helen Klein Ross--like Amity Gaige with Schroder, or Emma Donoghue with Room--takes a shocking premise and uses it to illuminate our human condition. A writer of compelling lucidity and vivid precision, she has compassion for all her characters."
— Claire Messud, New York Times bestselling author of The Woman Upstairs

"Not only a terrific, spellbinding read but a fascinating meditation on the choices we make and the way we love."
— Elin Hilderbrand, New York Times bestselling author of The Rumor

“In a tale ripe with opportunities for drama, Helen Klein Ross never puts a foot wrong.  She lets the story tell itself, and in so doing heightens both suspense and emotional impact.  Readers will be moved to understanding, but never to judgmentalism.  A stellar performance, and highly recommended."
— Ann Arensberg, National Book Award winner

“Sometimes heartbreaking, sometimes joyous, and always riveting, What Was Mine masterfully makes you question where your sympathy should lie at every turn. I couldn’t put down this fast-paced, fascinating psychological study of motherhood."
— Lynn Cullen, bestselling author of Twain's End and Mrs. Poe

"Ross crafts a surprisingly sensitive meditation on the definitions of family and motherhood around a ripped-from-the-tabloids story… Ross deftly creates genuinely sympathetic characters and emotionally resonant prose around what could have felt sensationalistic.”

"Helen Klein Ross pulled me into her intimate tale of loss, love, redemption, and forgiveness that had me turning pages long into the night. You’ll fall in love with What Was Mine.”
— Marci Nault, author of The Lake House

"A powerful plot told with exactly the right approach, What Was Mine is capable of sparking plenty of discussion, whether it is over a water cooler, in a book club or simply in the reader's mind."

"Helen Klein Ross writes with such emotion from all sides."
— Fresh Fiction

Helen Klein Ross is a poet and novelist whose work has appeared in The New Yorker, The Los Angeles Times, The New York Times, and in The Iowa Review where it won the 2014 Iowa Review award in poetry. She graduated from Cornell University and received an MFA from The New School. Helen lives with her husband in New York City and Salisbury, CT.
Loading...
or support indie stores by buying on