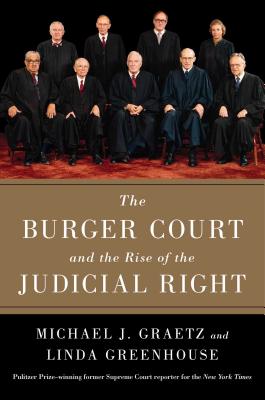 The Burger Court and the Rise of the Judicial Right

"This is the best kind of legal history: cogent, relevant, and timely, given the focus on the Court’s role and power after the death of Justice Scalia."
— Publishers Weekly

"Timely and engaging, Graetz and Greenhouse’s study provides a richly detailed look at the high court’s jurisprudence on the most heated issues of the past half-century. Even readers who follow the court’s work closely will find revelatory reporting."
— Jay Strafford

“This revelatory book resets how we think about the Constitution and the Supreme Court that interprets it. The Court led by Chief Justice Warren Burger is often seen as an afterthought, wedged between the Warren Court and the hard right Justices today. In fact the 1970s and 1980s set the pattern for decades of American life, on topics from campaign finance to presidential power to criminal law. With clarity and insight, Michael Graetz and Linda Greenhouse show how the often jumbled doctrines of that time helped produce the America of today.”
— Michael Waldman, President, Brennan Center for Justice at NYU School of Law and author of The Fight to Vote

“An insightful and well-researched examination of the Burger Court."
— Library Journal (starred review)

“In The Burger Court and the Rise of the Judicial Right, Graetz and Greenhouse offer an insightful and intimate view of life and law behind the scenes in the Burger Court. By exploring the debates among the justices on such fundamental issues as women’s rights, abortion, the death penalty, religion, and racial equality, they offer exciting new perspectives on the interactions of the justices and the evolution of the law in the Court that was created by Richard Nixon.”
— Geoffrey Stone, Edward H. Levi Distinguished Service Professor at the University of Chicago, and chief editor the Inalienable Rights series

“With crisp intelligence and notable fairness, The Burger Court and the Rise of the Judicial Right shows how quickly and profoundly politics can reshape the law of the land. The appointment of four conservative justices in the Nixon years led the Court to gut landmark rulings, empowering the judicial right in ways that still reign. Michael Graetz and Linda Greenhouse have written an engrossing and excellent book that will lead Court-watchers to think in importantly different terms about the Burger Court. The book also makes clear why, with openings expected soon on the current Court, it should be a paramount concern in the 2016 elections.”
— Lincoln Caplan, Senior Research Scholar, Yale Law School, and author of The Tenth Justice: The Solicitor General and the Rule of Law

“With remarkable skill, Michael Graetz and Linda Greenhouse show how the Burger Court eroded the equality that underlay almost all the work of the Warren Court. They make a compelling case that it provided the vital seedbed that enabled the judicial right of the Rehnquist and Roberts eras to flower. This extraordinary book will engage everyone who cares about the contemporary Supreme Court and its history.”
— Laura Kalman, Professor of History, University of California, Santa Barbara

“Michael Graetz and Linda Greenhouse’s wonderful book on the Burger Court is the best survey and analysis that I have seen of the actions and implications of the decisions of that Court. It will be indispensable for scholars as well as ordinary citizens interested in the political and constitutional history of that fraught period of time. It was a fascinating Court and worthy of close attention and analysis. The authors have done it justice.”
— John Ferejohn, Samuel Tilden Professor of Law, NYU Law School