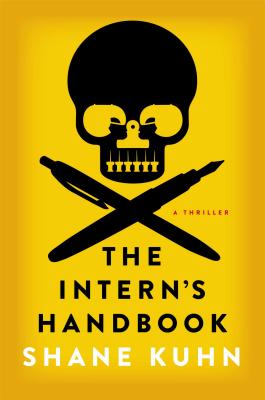 A Thriller (A John Lago Thriller #1)

Interns are invisible. That’s the mantra behind HR, Inc., an elite “placement agency” that doubles as a network of assassins-for-hire, taking down high-profile executives who wouldn’t be able to remember an intern’s name if their lives depended on it.

JOHN LAGO IS A HITMAN. HE HAS SOME RULES FOR YOU. AND HE’ S ABOUT TO BREAK EVERY SINGLE ONE.

John Lago is a very bad guy. But he’s the very best at what he does. And what he does is infiltrate top-level companies and assassinate crooked executives while disguised as an intern.

Interns are invisible. That’s the secret behind HR, Inc., the elite “placement agency” that doubles as a network of assassins for hire who take down high-profile targets that wouldn’t be able to remember an intern’s name if their lives depended on it.

At the ripe old age of almost twenty-five, John Lago is already New York City’s most successful hit man. He’s also an intern at a prestigious Manhattan law firm, clocking eighty hours a week getting coffee, answering phones, and doing all the grunt work actual employees are too lazy to do. He was hired to assas­sinate one of the firm’s heavily guarded partners. His internship provides the perfect cover, enabling him to gather intel and gain access to pull off a clean, untraceable hit.

Part confessional, part DIY manual, The Intern’s Handbook chronicles John’s final assignment, a twisted thrill ride in which he is pitted against the toughest—and sexiest—adversary he’s ever faced: Alice, an FBI agent assigned to take down the same law partner he’s been assigned to kill.

Praise For The Intern's Handbook: A Thriller (A John Lago Thriller #1)…

“All of the testosterone-bloated wisdom of Tucker Max mixed with the satire of American Psycho.”

“A sexy, darkly comic thriller with cinematic flourishes… Explosively violent and psychologically wily the way a good thriller should be.”

“This Handbook was made for the multiplex. . . . Faceless and forgettable, an intern's as invisible as a ninja in fluorescent lights—and, at least in John Lago's case, just as deadly.”

“Imagine Dexter working in The Office."

“Once I started reading The Intern’s Handbook, I had a hard time putting it down. Over the course of three days, I spent any spare moment I had immersed in the book. The wit and humor had me laughing out loud at times; the twists and turns in the plot kept me wondering what was going to happen next.”

“John is an appealing narrator, a hit man with his own code of honor about collateral damage that sometimes puts him at odds with his elusive boss, Bob, who may or may not have John's best interests in mind. Fans of Duane Swierczynski's Charlie Hardie trilogy and Josh Bazell's Beat the Reaper should enjoy this witty, deadly thriller.”

“Black humor and surprise twists distinguish Kuhn’s highly entertaining debut, which puts a fresh spin on the theme of the hardened criminal planning one last job. . . . Not least of the charms of this likable and energetic, if amoral, character are the amusing swipes he takes at other killers in fiction and film.”

“Kuhn’s debut is a prime example of dark and mordant humor in the midst of a fast-moving, suspenseful, action-packed ride. Those who like Dexter will love John Lago.”

“A propulsive, well-written black comedy. . . . Believable dialogue, a whip smart and cynical central character, clever reversals and an entertaining amount of bone-crunching violence help wrap up this nasty package with a pretty little bow. An entertaining, ferociously violent romp about a morally bankrupt killer trying to find his way home.”