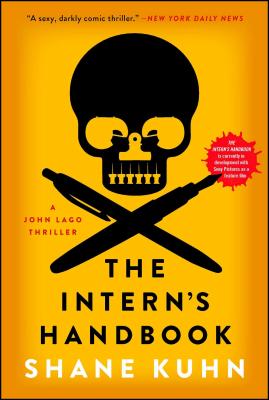 “Imagine Dexter working in The Office” (Milwaukee Journal-Sentinel) and you have John Lago, intern at one of the biggest law firms in Manhattan. He clocks eighty hours a week getting coffee, answering phones, and doing all of the grunt work no one else wants to do…and he doesn’t make a dime. But John isn’t trying to claw his way to the top of the corporate food chain. He was hired to assassinate one of the firm’s high profile, heavily guarded partners. His internship is the perfect cover—he can gather intel and secure the access he needs to execute a clean, untraceable kill. “Faceless and forgettable, an intern’s as invisible as a ninja in fluorescent lights—and, at least in John Lago’s case, just as deadly” (NPR.org).

The Intern’s Handbook begins as an unofficial survival guide for new recruits at Human Resources, Inc.—a front for one of the most elite assassin training and “placement” programs in the world—and becomes a chronicle of John’s final assignment, a twisted, violent thrill ride in which he is pitted against the strongest (and sexiest) adversary he has ever faced: Alice, a federal agent assigned to investigate the same law firm partner John’s been hired to kill.

Praise For The Intern's Handbook: A John Lago Thriller…

“Black humor and surprise twists distinguish Kuhn’s highly entertaining debut, which puts a fresh spin on the theme of the hardened criminal planning one last job. . . . Not least of the charms of this likable and energetic, if amoral, character are the amusing swipes he takes at other killers in fiction and film.”
— Publishers Weekly

“Kuhn’s debut is a prime example of dark and mordant humor in the midst of a fast-moving, suspenseful, action-packed ride. Those who like Dexter will love John Lago.”
— Booklist

“All of the testosterone-bloated wisdom of Tucker Max mixed with the satire of American Psycho.”
— Entertainment Weekly

Shane Kuhn is a writer, director, and producer with twenty years of experience working in feature films, documentaries, and advertising. He is a cofounder and executive board member of the Slamdance Film Festival, and a member of the Writer’s Guild of America. He lives in Colorado and works as Vice President of Creative Services for a San Francisco-based media and special events company. He is the author of The Asset, The Intern’s Handbook, bought for film by Sony Pictures, and Hostile Takeover, the second book in his John Lago intern-assassin thriller series.
Loading...
or support indie stores by buying on