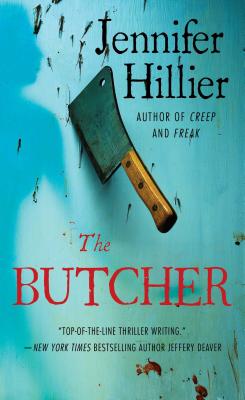 From the acclaimed author of Creep and Freak whom #1 bestselling author Jeffery Deaver praised as a “top-of-the-line thriller writer,” a high-octane novel about lethal secrets that refuse to die—until they kill again.

A rash of grisly serial murders plagued Seattle until the infamous “Beacon Hill Butcher” was finally hunted down and killed by police chief Edward Shank in 1985. Now, some thirty years later, Shank, retired and widowed, is giving up his large rambling Victorian house to his grandson Matt, whom he helped raise.

Settling back into his childhood home and doing some renovations in the backyard to make the house feel like his own, Matt, a young up-and-coming chef and restaurateur, stumbles upon a locked crate he’s never seen before. Curious, he picks the padlock and makes a discovery so gruesome it will forever haunt him… Faced with this deep, dark family secret, Matt must decide whether to keep what he knows buried in the past, go to the police, or take matters into his own hands.

Meanwhile Matt’s girlfriend, Sam, has always suspected that her mother was murdered by the Beacon Hill Butcher—two years after the supposed Butcher was gunned down. As she pursues leads that will prove her right, Sam heads right into the path of Matt’s terrible secret.

“A tense, suspenseful, thoroughly creepy thriller” (Booklist), The Butcher will keep you guessing until the bitter, bloody end. Don’t miss this “thrill ride that will have your attention from start to finish” (Suspense Magazine).

Praise For The Butcher…

“Hillier's third thriller fairly shudders with tension. [She] sends her reader into a labyrinth of creepy twists and grotesque turns…The secrets of the past refuse to keep quiet in this disquieting, taut thriller.”
— Kirkus

“As she ably proved in her debut (Creep, 2011), [Hillier] has a fine knack for creating hideous killers. This time she turns the formula whodunit on its head… A tense, suspenseful, thoroughly creepy thriller.”
— Booklist

"Once I got started I couldn’t stop reading, and I confess to having sweaty palms a few times. A thrill ride that will have your attention from start to finish! This one is 4.5 stars."
— Suspense Magazine

“Replete with plot twists and surprises, The Butcher is an engrossing tale that piques the reader’s interest immediately and then holds on to it like an angry pitbull.”
— NJ Journal of Books

"The Butcher is a clever, twisted thriller about genetics, faith, and death . . . The greatest thing about The Butcher is its uncanny ability to trump the narrative conventions of the conventional serial killer novel over and over again . .  Jennifer Hillier's prose remains fast paced and immensely readable as her content becomes quirkier and more cerebral with every novel."
— Dead End Follies

"Hillier writes beautifully horrific stories… Readers will be immersed until the final page, thanks to the velocity at which this unique thriller is told.”
— RT Reviews (Top Pick)

"[A] rapid-fire thriller of dark, unsettling proportions with some very surprising twists. With the turn of each new page, the suspenseful plot is tense and gripping...a skillfully penned tale of murder and cover-up that will keep readers enthralled until the powerful finish. Thriller fans should not miss The Butcher!
— Fresh Fiction

Jennifer Hillier made her fiction debut with Creep, and is now the author of six psychological thrillers. Originally from Canada, she spent eight years in the Pacific Northwest before returning to the Toronto area, where she lives with her husband and son. Visit her on the web at JenniferHillierBooks.com.
Loading...
or support indie stores by buying on