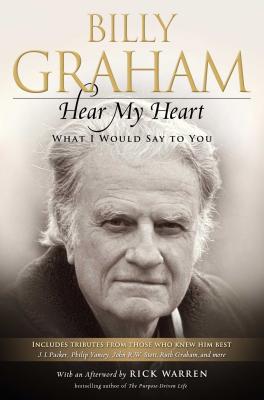 What I Would Say to You

Millions the world over have heard Billy Graham’s evangelistic messages.

America’s pastor has gone home. But his lifelong message, his passion for the gospel, and his compassion for people still echo in Hear My Heart. This intimate work, a compilation of articles that spans Billy’s ministry from 1955 to 2014, invites you to sit down with Billy and hear in his own unvarnished words the things that moved his heart regarding relevant issues of the day. The Biblical convictions he abided by. The reasons and regrets behind some of his decisions. And the wisdom he gained in his century on this earth.

Hear My Heart also presents stirring tributes, collected over many years, about Billy and his legacy from those who knew him best in all the seasons of his life—including his family members, his friends, and his co-laborers in ministry. Though their lives may have changed, Billy’s impact remains the same, and their words are beautifully preserved in essays that reflect the power of his ministry. This book was assembled and printed to be released upon his passing so that his final words would bring comfort and peace to the many lives he touched.

This is his legacy—the personal exhortations he left our generation and those yet to come.

Billy Graham (1918—2018) was known as America’s pastor and was a spiritual advisor to many US presidents, from Harry S. Truman to Barack Obama. Graham preached to live audiences of nearly 215 million people in more than 185 countries and territories. He also reached hundreds of millions more through TV, video, film, and webcasts.

Rick Warren is the founding pastor of Saddleback Church, one of the largest churches in the world, with campuses in the US and around the globe. He is the author of The Purpose Driven Life, one of the bestselling nonfiction books in publishing history. It has been translated into 137 languages and sold more than 50 million copies in multiple formats.