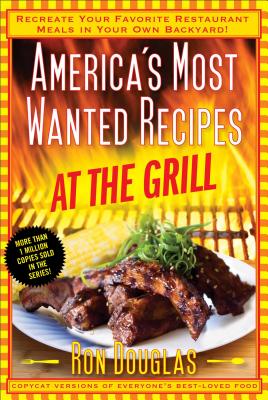 America's Most Wanted Recipes At the Grill

Recreate Your Favorite Restaurant Meals in Your Own Backyard! (America's Most Wanted Recipes Series)

Ron Douglas fires up his outrageously successful America’s Most Wanted Recipes series in this essential guide to recreating the most popular grilled dishes from the country’s most famous restaurants.

When it’s grilling season, Ron Douglas, the New York Times bestselling author of America’s Most Wanted Recipes, likes to do it up big. Not just a few burgers on the grill, but steaks, seafood, corn on the cob, and of course his favorite restaurant remakes. So if you’ve ever wanted to make the savory grilled dishes from your favorite restaurants in the comfort of your own backyard—and save money in the process—then you’re in for a treat!

Inside America’s Most Wanted Recipes At the Grill, you’ll find more than 150 copycat recipes from the most popular restaurants in the US, including Applebee’s Riblets with Honey Barbecue Sauce, California Pizza Kitchen’s Jamaican Jerk Chicken Pizza, the Cheesecake Factory’s SkinnyLicious Grilled Chicken, Famous Dave’s Pit Barbeque Ribs, KFC’s Honey BBQ Sauce, TGI Friday’s Jack Daniels Grill Glaze, and much, much more. Every dish has been tested and tweaked to taste just like the original. You’ll impress your friends and family with these copycat versions—or by putting a healthy twist on them and preparing the dishes exactly to your liking.

Also included in the book is a special grilling guide to help home chefs become the grill master their guests will be raving about all year long. So fire up the grill and get ready to taste your favorite restaurant dishes at home!

“Use this book to get the feeling of dining out without busting your budget or diet.”
— Library Journal

Ron Douglas is the New York Times bestselling author of the America’s Most Wanted Recipes series, which includes, most recently, America’s Most Wanted Recipes At the Grill. He is a former finance director at JP Morgan and founder of the #1 copycat recipe website, RecipeSecrets.net. He lives in New York with his wife and two children.
Loading...
or support indie stores by buying on
(This book is on backorder)