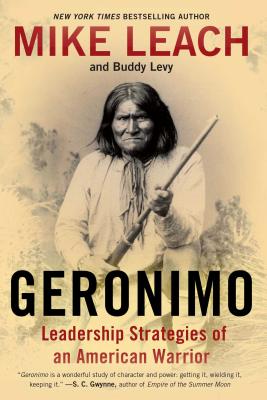 Leadership Strategies of an American Warrior

“In the hands of Mike Leach and Buddy Levy, the story of this brilliant Apache leader comes into sharp focus, both in their narrative of his life and in spirited commentaries on its meaning” (S.C. Gwynne, author of Pulitzer Prize finalist Empire of the Summer Moon).

Playing cowboys and Indians as a boy, legendary college football coach Mike Leach always chose to be the Indian—the underdog whose success turned on being a tough, resourceful, ingenious fighter. And the greatest Indian military leader of all was Geronimo, the Apache warrior whose name is so symbolic of courage that World War II paratroopers shouted it as they leaped from airplanes into battle.

Told in the style of Robert Greene’s The 48 Laws of Power, Leach’s compelling and inspiring book examines Geronimo’s leadership approach and the timeless strategies, decisions, and personal qualities that made him a success. Raised in an unforgiving landscape, Geronimo and his band faced enemies better armed, better equipped, and more numerous than they were. But somehow they won victories against all odds, beguiling the United States and Mexican governments and earning the respect and awe of those generals committed to hunting him down. While some believed that Geronimo had supernatural powers, much of his genius can be ascribed to old-fashioned values such as relentless training and preparation, leveraging resources, finding ways to turn defeats into victories, and being faster and more nimble than his enemy. The tactics of Geronimo would be studied and copied by the US military for generations.

Pain, pride, humility, family—many things shaped Geronimo’s life. In this “compelling book that humanizes a man many misunderstood” (New York Times bestselling author Brian Kilmeade), Mike Leach illustrates how we too can use the forces and circumstances of our own lives to build true leadership today.

Praise For Geronimo: Leadership Strategies of an American Warrior…

"Mr. Leach's narrative (with an assist from writer Buddy Levy ) tells the highly compelling story of a strong and resourceful people."
— Dave Shiflett

Mike Leach is a legendary college football coach and New York Times bestselling author of Swing Your Sword. He has appeared on 60 Minutes and has been featured in The New York Times Magazine, Sports Illustrated, ESPN The Magazine, and USA TODAY. He is the only college coach ever featured by NFL Films.

Buddy Levy is the author of Conquistador, River of Darkness, and American Legend. He is co-star of Brad Meltzer’s Decoded on H2 (History Channel), and has been featured or reviewed in The New York Times, The Wall Street Journal, USA TODAY, The Washington Post, The Washington Times, Kirkus Reviews, Publishers Weekly, Booklist, and Library Journal.
Loading...
or support indie stores by buying on