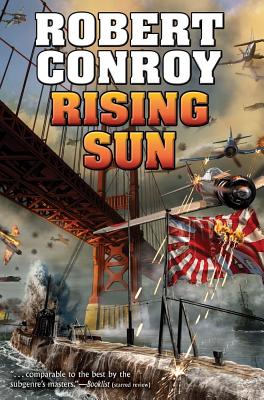 It is the summer of 1942 and what our historians have called the Incredible Victory in the Battle of Midway has become a horrendous disaster in this world. Two of America’s handful of carriers in the Pacific have blundered into a Japanese submarine picket line and have been sunk, while a third is destroyed the next day. The United States has only one carrier remaining in the Pacific against nine Japanese, while the ragtag remnants of U.S. battleships – an armada still reeling from the defeat at Pearl Harbor – are in even worse shape.

Now the Pacific belongs to the Japanese. And it doesn’t stop there, as Japan has thrust her sword in to the hilt. Alaska is invaded. Hawaii is under blockade. The Panama Canal is nearly plugged. Worst of all, the West Coast of America is ripe for destruction as bombers of the Empire of the Sun bombard west coast American cities at will.

Despite these disasters, the U.S. begins to fight back. Limited counterattacks are made and a grand plan is put forth to lure the Japanese into an ambush that could restore the balance in the Pacific and give the forces of freedom a fighting chance once more.

About Rising Sun:
“Conroy extrapolates a new and militarily plausible direction for WWII . . . A thrilling adventure.”—Booklist

About Himmler’s War:
“[Conroy] adds a personal touch to alternate history by describing events through the eyes of fictional characters serving on the front lines. VERDICT: Historical accuracy in the midst of creative speculation makes this piece of alternate history believable.”–Library Journal

“A significant writer of alternate history turns here to the popular topic of , producing. . . this rousing historical action tale.”—Booklist

Robert Conroy is the author of a run of hugely popular alternate history novels, including Himmler’s War for Baen Books. His 1942, which is set within a Japanese conquest of Hawaii, won the prestigious Sidewise Award for alternate histories. Conroy has written for Military Historymagazine and has traveled extensively in Europe where he’s taken a special interest in battlefields, historical collections and castles. After a first career in business, Conroy has turned his lifelong passion for writing and military history into an immensely satisfying new occupation. He is married, lives in southeastern Michigan, and, when not writing, teaches business and economic history at a local college.
or support indie stores by buying on
Copyright © 2020 American Booksellers Association