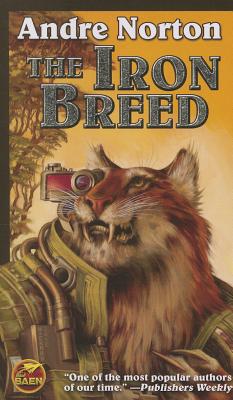 Two bestselling novels of science fiction adventure from legendary storyteller Andre Norton collected together for the first time, The Iron Cage and Breed to Come. A young woman and a young man face down powerful enemies as they come of age in a far future universe full of menace and technology so powerful as to be almost magic.

The Iron Cage: Johnny has always loved and been protected by the People, the bearlike inhabitants on the planet he calls home. But when a star ship arrives carrying Johnny’s original species, humans–humans who seek to exploit the People for their own ends–Johnny is forced to choose between loyalty to the creatures he considers his family, and the need to reconnect with his long lost heritage.

Breed to Come: On a distant future Earth, humans have polluted the planet and departed, leaving their pets behind to inherit a blasted world. But from that devastated past, a new breed of intelligence arises: the catlike People. Now humans return and the People are in no mood to deal once again with the “demons” who abandoned them to fate so long ago.

"The Grand Dame of Science Fiction…”–Time

“One of the all-time masters.”–Peter Straub

Andre Norton has been called “one of the most popular authors of our time” by Publishers Weekly. She is a seminal influence on many of today’s top writers including David Weber, Eric Flint, and Peter Straub. Norton received the Grand Master award from the Science Fiction Writers of America and the Lifetime Achievement Award of the World Fantasy Convention. She was astoundingly prolific, with over thirty books in the celebrated Witch World series alone, and introduced three generations of readers to a wide range of science fiction and fantasy classics over a long and lauded career.
Loading...
or
Not Currently Available for Direct Purchase