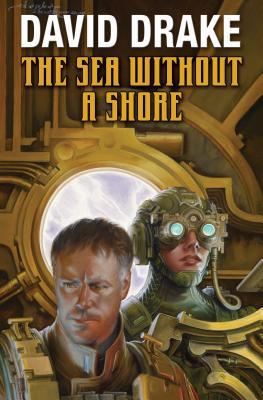 The Sea Without a Shore

LEARY AND MUNDY RETURN in the RCN SERIES. #10 in the nationally best-selling Republic of Cinnabar Navy space adventure series. Cinnabar's chief spymaster is a mother also--and her son is determined to search for treasure in the midst of a civil war. Who better to hold the boy's hand--and to take the blows directed at him--than Captain Daniel Leary, the Republic of Cinnabar Navy's troubleshooter, and his friend the cyberspy Adele Mundy? The only thing certain in the struggle for control of the mining planet Corcyra is that the rival parties are more dangerous to their own allies than to their opponents. Daniel and Adele face kidnappers, hijackers, pirates and a death squad--even before they can get to their real business of ending the war on Corcyra. Only with planetary peace can the boy they're escorting get on with his mission. The boy thinks the treasure he's looking for is a thousand years old. Daniel and Adele know that it's probably a dream-- But if the treasure is real, it just might be tens of thousands of years older than anyone imagines, and incalculably more valuable About David Drake's previous RCN novel, What Distant Deeps: "Drake deftly weaves a web of political machinations and intrigue that vividly depicts the costs of war. Fans of Patrick O'Brian's Maturin and Aubrey novels will enjoy this intricate, rousing space opera." -Publishers Weekly About David Drake's RCN series:
" R]ousing old-fashioned space opera." -Publishers Weekly "The fun is in the telling, and Mr. Drake has a strong voice. I want more " -Philadelphia Weekly Press " S]pace opera is alive and well. This series is getting better as the author goes along...character development combined with first-rate action and memorable world designs." -SFReader.com About David Drake:
" P]rose as cold and hard's the metal alloy of a tank...rivals Crane and Remarque..." -Chicago Sun-Times "Drake couldn't write a bad action scene at gunpoint." -Booklist

David Drake was attending Duke University Law School when he was drafted. He served the next two years in the Army, spending 1970 as an enlisted interrogator with the 11th armored Cavalry in Viet Nam and Cambodia. Upon return he completed his law degree at Duke and was for eight years Assistant Town Attorney for Chapel Hill, North Carolina. He has been a full-time freelance writer since 1981. His books include the genre-defining and bestselling Hammer's Slammers series, the RCN series including What Distant Deeps, In the Stormy Red Sky, The Road of Danger, and many more.
Loading...
or
Not Currently Available for Direct Purchase