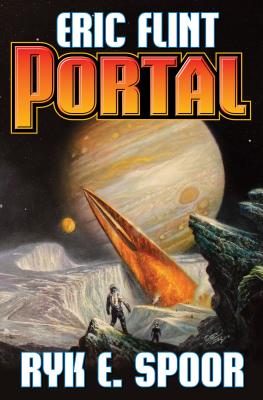 Madeline Fathom had miraculously landed the crippled Nebula Storm on Europa. She joined on that frozen moon of Jupiter the stranded crewmembers of the ill-fated EU vessel Odin. The Nebula Storm's reactor was ruined in the landing, the Odin’s shuttle can’t make the trip back home, and the only vessel that could have make the journey to save them has just been destroyed by a renegade crewman, bad luck, and the remorseless forces of nature.

But Madeline, Helen Sutter, A.J. Baker and the team have one card left to play. All they have to do... is survive lethal radiation, vacuum, and ice as hard as steel while they figure out how to make Nebula Storm fly again.

Eric Flint is a modern master of alternate history fiction, with 3 million books in print. He’s the author/creator of the multiple New York Times best-selling Ring of Fire series, starting with first novel 1632. With David Drake he has written six popular novels in the “Belisarius” alternate Roman history series, and with David Weber he has collaborated on 1633 and 1634: The Baltic War, as well as four novels in Weber's Honorverse series. Flint was for many years a labor union activist. He lives near Chicago, Illinois.
Loading...
or
Not Currently Available for Direct Purchase