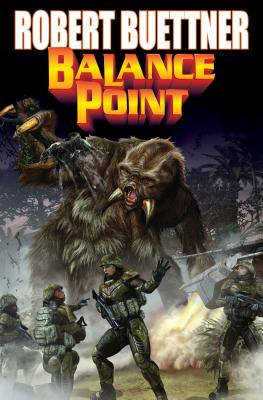 #3 in the science fiction adventure Orphan's Legacy series, a saga of spy games and military action on an interplanetary scale. The balance point of interplanetary Cold War II between Earth and monolithic Yavet tips unexpectedly toward peace. Covert ops Captain Jazen Parker and his sharp shooting lover and partner Kit Born slide from world saving hazardous duty to escorting a telepathic alien monster home from Earth to mate. And the two of them are forced to consider a quiet domestic future together. But when old enemies' thirsts for power and revenge, Jazen's problematic past, and his former girlfriend, upset Jazen and Kit's personal balance point, the two cold warriors find their relationship, and their very survival, tested as never before. Lost in space, and from one another, they must each penetrate Yavet, the universe's most insular and repressive world, then foil a plot that could turn Cold War II hot and nuclear--or die trying. About Balance Point
"Fans of classic military SF will enjoy the twists and quips . . ."--Publishers Weekly

"Buettner . . . conducts his thriller action with suspense and plausibility. All the separate threads balance neatly, as if in homage to the books themes of balance between antagonistic polities . . . and Balance Point] carries forward nobly the kind of core SF tale pioneered by writers such as Anderson, Gordon Dickson, Christopher Anvil, James Schmitz, and C. J. Cherryh, offering entertainment aplenty with thoughtful meditations on how humanity can get along with itselfor not "--Locus About Robert Buettner and the Orphan's Legacy Series:
"Buettner goes well beyond . . . military science fiction . . . he understands . . . living as a soldier--the boredom punctuated by terror, the constant anxiety and self-doubt, the random chaos that battle always is, and the emotional glue that holds together people who may have nothing in common except absolute responsibility for one another's lives." --Joe Haldeman, Hugo and Nebula Award-winning author " O]nce in a while . . . a contemporary author penetrates to the heart of Heinlein's vision . . . to replicate the master's effects. . . . O]ne such book is] Robert Buettner's Orphanage." --The Washington Post "Entertaining. Buettner shows the Heinlein touch." --Denver Post

Robert Buettner served as an Army intelligence officer. After his discharge, he continued as an Army reservist and became a geologist and then a lawyer specializing in natural resources. Buettner has the licks of a modern-day Robert A. Heinlein when it comes to science fiction storytelling. He currently lives near Atlanta, Georgia.
or
Not Currently Available for Direct Purchase