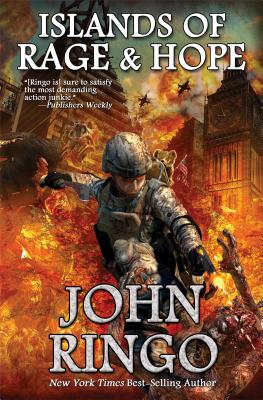 BOOK 3 IN THE BLACK TIDE RISING SERIES FROM THE NEW YORK TIMES BEST-SELLING AUTHOR.  Sequel to To Sail a Darkling Sea and Under a Graveyard Sky. A hardened group of survivors fights back against a zombie plague that has brought down civilization.

With the world consumed by a devastating plague that drives humans violently insane, what was once a band of desperate survivors bobbing on a dark Atlantic ocean has now become Wolf Squadron, the only hope for the salvation of the human race.  Banding together with what remains of the U.S. Navy, Wolf Squadron, and its leader Steve Smith, not only plans to survive—he plans to retake the mainland from the infected, starting with North America.

The next step: produce a vaccine.  But for do that, Wolf Squadron forces led by Smith’s terrifyingly precocious daughters Sophia and Faith must venture into a sea of the infected to obtain and secure the needed materials.  And if some of the rescued survivors turn out to be more than they seem, Smith just might be able to pull off his plan.

About the Black Tide Rising Series:
"Not only has Ringo found a mostly unexplored corner of the zombie landscape, hes using the zombie frame to tackle a broader theme: the collapse and rebirth of civilization. The zombie scenes are exciting, sure, but its the human story that keeps us involved. A fine series."—Booklist

BLACK TIDE RISING SERIES:
Under a Graveyard Sky
To Sail a Darkling Sea
Islands of Hope and Rage
Strands of Sorrow (upcoming)

John Ringo is the New York Times best-selling author of the Black Tide Rising series, the Posleen War series, the Through the Looking Glass series, and more, including the Troy Rising series, of which Live Free or Die is the first installment. A veteran of the 82nd Airborne, Ringo brings firsthand knowledge of military operations to his fiction.
Loading...
or support indie stores by buying on
(This book is on backorder)