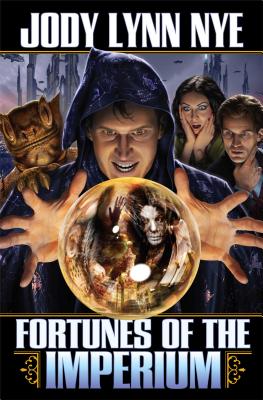 Fortunes of the Imperium

Sequel to A View from the Imperium. Jeeves in space! Rollicking adventure featuring a seemingly dense, lovable nobleman and his indespensible, droll aide, Parsons.

Lieutenant Lord Thomas Kinago sets out from the Imperium homeworld for the Autocracy of the Uctu, a galactic region with a geckolike overlord known, eponymously, as the Autocrat. Thomas is ostensibly on a pleasure cruise with his cousin Jil to enjoy the pleasures of the Gecko culture. (Jil is herself fleeing a spot of trouble in the Central Worlds after she rebuffed the unwanted amorous interest of a local crime boss)

In fact, Thomas is on a mission for the mysterious Mr. Frank, the head of the secret service, to discover how prohibited goods, including a small fighter ship, are being smuggled into the Autocracy. His crew’s overt assignment is to find out why legitimate shippers are being detained at checkpoints, sometimes for months, without explanation. As usual, Thomas’s reputation for sudden enthusiasm and goodhearted mayhem precede him. It is all his trusted aid Parsons can do to keep his leader on course.

Thomas’s newest interest is superstitions, and he is driving everyone to distraction by telling fortunes, and even inventing a new method or two. Yet while the Autocrat, a new and fairly young Uctu female, finds Thomas a curious diplomat, she also rather likes him—much to Parsons’s relief. It seems Thomas needs free passage within the Uctu home system before he can investigate the illegal contraband trade. What’s more, the smuggling ring is quite determined to cancel Thomas’s visit before he can cancel them.  As usual, it’s up to Parsons to find a way to lead his hapless master to victory—or at least keep him from getting himself killed by a very determined enemy.

Praise for Jody Lynn Nye’s An Unexpected Apprentice:
“I thoroughly enjoyed it, the plot, the settlement, the whole nine yards, and especially the twitch of humor at odd moments...a book I can thoroughly recommend.” —Anne McCaffrey

Jody Lynn Nye lives in Illinois with her husband and two cats of superior bearing. Her numerous works of science fiction and fantasy include An Unexpected Apprentice and its sequel, A Forthcoming Wizard, Applied Mythology, Advanced Mythology, and others. She has collaborated with New York Times best-selling author Anne McCaffrey on The Death of Sleep, The Ship Who Won, Doona and other novels, and with another New York Times best-selling author, Robert Asprin, on books in his “Myth” series.
Loading...
or
Not Currently Available for Direct Purchase