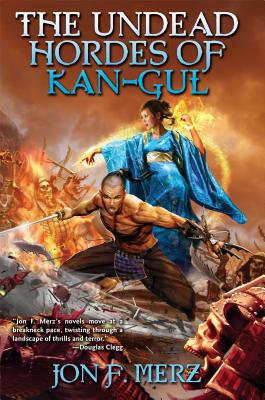 The Undead Hordes of Kan-Gul

Ninjas and zombies Book 1 in the Shadow Warrior saga. A young ninja in an Asian-flavored fantasy land of dreams and nightmares must face an army of zombies to save a beautiful sorceress. Book One in an exciting new series, the Shadow Warrior saga. In the fog-enshrouded peaks of the island nation of Nehan, Ran, a newly-minted shadow warrior is set loose on a musha shugyo, a wandering quest, whereby he must travel alone and hone his skills. Journeying aboard a merchant vessel, Ran hears tales of a mysterious lord believed to have the dead for his servants. Soon these tales prove all too real as Ran comes to the aid of Jysal, a beautiful sorceress, whose undeveloped power gives her the ability to heal a land -- or destroy it. But the Lord Kan-Gul also covets Jysal's power. And when Kan-Gul sends a army of the undead to take Jysal by force, Ran is faced with the ultimate warrior's choice: save himself, or face down a horde of enemies that cannot be killed for the simple reason that they are already dead About The Undead Hordes of Kan-Gul
"Merz keeps the action uptempo and the swordplay fast and furious. The cover is no doubt eye catching, but the thrills inside are just as enchanting. A real winner."--Examiner.com About Jon F. Merz:
"Jon F. Merz's novels move at a break-neck pace, twisting through a landscape of thrills and terror." -- Douglas Clegg, best selling author of The Infinite The Shadow Warrior Series
The Undead Hordes of Kan-Gul
Slavers of the Savage Catacombs

Jon F. Merz grew up a reader and explorer in Boston, Massachusetts. After college and stint in the Air Force, Merz worked in private security, handling a wide array of assignments including executive protection and corporate investigations. In 1998, he left the corporate world behind and became a full-time writer. His works include the Jake Thunder and Lawson Vampire series, and Slavers of the Savage Catacombs, latest entry in the Shadow Warrior saga.
Loading...
or
Not Currently Available for Direct Purchase