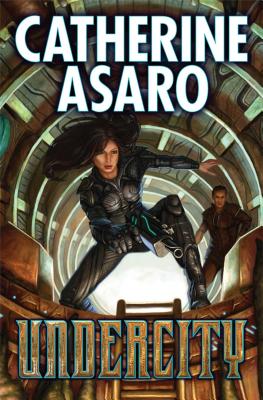 BOOK ONE IN A BRAND NEW SERIES by Nebula and Hugo Award Winner Catherine Asaro set in the world of her Skolian Empire universe. In the galaxy-spanning future, Major Bhaajan is a tough female P.I. who works the dangerous streets of Undercity. Major Bhaajan, a former military officer with Imperial Space Command, is now a hard-bitten P.I. with a load of baggage to deal with, and clients with woes sometimes personal, sometimes galaxy-shattering, and sometimes both. Bhaajan must sift through the shadows of dark and dangerous Undercity--the enormous capital of a vast star empire--to find answers. About Undercity:
"Asaro plants herself firmly into that grand SF tradition of future history franchises favored by luminaries like Heinlein, Asimov, Herbert, Anderson, Dickson, Niven, Cherryh, and Baxter. . .They don't write em like that anymore Except Asaro does, with . . . up-to-the-minute savvy "--Locus " Bhaajan], who starts out keeping an emotional distance from the people in the Undercity soon grows to think of them as her community once more. Asaro . . . returns to the Skolian empire's early history to tell Bhajaan's story."--Booklist

"Asaro delivers a tale rich with the embedded history of her world and bright with technical marvels. Her characters are engaging and intriguing and there is even a bit of romance. What really touched my heart was Bhaaj's interaction with the children of the aqueducts. I spent the last fifty pages of the book sniffling into a tissue."--SF Crowsnet

"I'm hooked, both on her writing and her Skolian universe. This book had everything I wanted: strong characters, a new and unique world, and a plot that isn't as simple as it first appears."--TerryTalk About Catherine Asaro's Skolian saga:
"Entertaining mix of hard SF and romance."--Publishers Weekly "Asaro's Skolian saga is now nearly as long and in many ways as compelling as Dune, if not more so, featuring a multitude of stronger female characters."--Booklist "Rapid pacing and gripping suspense."--Publisher's Weekly

Two-time Nebula-award winner Catherine Asaro has an M.A. in physics and a Ph.D. in chemical physics from Harvard. A former ballet and jazz dancer, she founded the Mainly Jazz Dance program at Harvard and now teaches at the Caryl Maxwell Classical Ballet. She has recently taken up singing, doing several gigs with contemporary and jazz styles. She's the creator of the popular Skolian Saga science fiction series with The Ruby Dice, Diamond Star and Carnelians, published by Baen. Her other books include near-future technothrillers Alpha and Sunrise Alley. Asaro lives in Maryland with her husband and daughter.
Loading...
or support indie stores by buying on