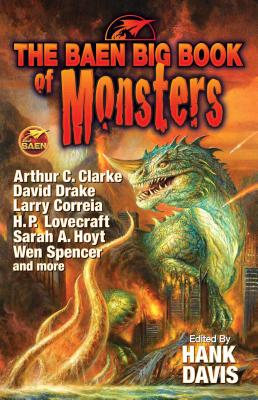 The Baen Big Book of Monsters

SIZE MATTERS
From the dragons of legend to Jack the Giant Killer’s colleague to King Kong and Godzilla, people have found the idea of giant creatures both scary and fascinating. Why so many should find accounts of a critter big enough to gulp down a puny human like an insignificantly small hor d’oeuvre or step on said human and leave a grease spot might be explained by the psychologists, but such yarns are undeniable fun, and here’s a book crammed full of things that you can’t outrun because they take big steps, by writers with equally large reputations, including:

David Drake, best-selling author of the Hammer’s Slammers and RCN series, describes the far future plight of an unusual descendant of present-day humans, who’s being pursued by the descendants of another species, which are much larger than they were in our time.

Robert Bloch, winner of the Hugo award and the lifetime achievement award of the World Fantasy Convention, and author of the classic horror novel Psycho, introduces an unusual orphan and aspiring thespian who was much more than he seemed and was destined to play the biggest role of anyone’s lifetime.

Philip Wylie, co-author of the SF classic, When Worlds Collide and other imaginative works, tells of the arrival of a very, very tall giant on Earth and what happened next, in a sharp-edged satiric tale.

Murray Leinster, known as the Dean of Science Fiction Writers, spins a yarn of a stranded starship whose crew must get replacement parts from an abandoned outpost in order to take off again—if they can reach the outpost through the swarming gigantic insect life of the planet.

H.P. Lovecraft, renowned master of horror, is on board with a story of a star-spawned thing which was not only huge, but invisible as well.

Plus all-new stories by New York Times best-selling author Larry Correia, and award-winning authors Sarah A. Hoyt and Wen Spencer. And much more.


About some of the contributors:

“Don’t plan on getting anything else done if you start a Wen Spencer novel; they are exceedingly hard to put down!” —Catherine Asaro, Nebula Award winning author

“[Sarah A. Hoyt’s science fiction is] exciting and appealing . . . so fast-paced . . . the reader will reach escape velocity.” —Kevin J. Anderson

Hank Davis is Senior Editor at Baen Books. He served in the Army in Vietnam and has had stories in Analog Science Fiction, The Magazine of Fantasy and Science Fiction, and anthologies If and Orbit.
Loading...
or
Not Currently Available for Direct Purchase