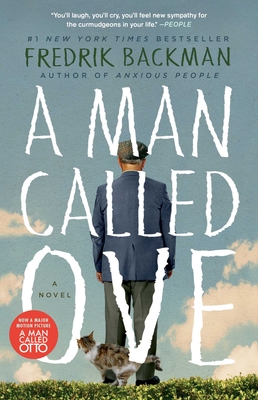 Fredrik Backman’s beloved first novel about the angry old man next door is a thoughtful exploration of the profound impact one life has on countless others. “If there was an award for ‘Most Charming Book of the Year,’ this first novel by a Swedish blogger-turned-overnight-sensation would win hands down” (Booklist, starred review).

"In turns moving and funny. . . I wager that you’ll soon fall in love with Ove and be deeply moved by his situation, and after spending time with him, may perhaps gaze at the world around you with a little more empathy than when you turned the first page."
— Eric Larson

"A magnificent homage to humanity and to the possibility of friendship and faith in long-lost love. It covers a lot of ground: marriage, love, race, class, division, gentrification. It's one of those good stories that connects."
— James McBride

“You will laugh, you will cry, as his heartbreaking story unfolds through the diverse cast of characters that enter his life, all uninvited. You will never look at the grumpy people who come into your life in quite the same way. A very memorable read."

"An inspiring affirmation of love for life and acceptance of people for their essence and individual quirks...a perfect selection for book clubs...bittersweet, tender, often wickedly humorous and almost certain to elicit tears.”
— BookBrowse.com

1. How does the opening scene, in which Ove attempts to purchase a computer, succinctly express the main points of Ove’s ongoing battle with the stupidities of the modern world?

2. Ove loves things that have a purpose, that are useful. How does this worldview fail him when he believes himself to be useless? How is he convinced that he can still be useful?

3. As readers, we get to know Ove slowly, with his past only being revealed piece by piece. What surprised you about Ove’s past? Why do you think the author revealed Ove’s past the way that he did?

4. We all know our own grumpy old men. How do Ove’s core values lead him to appear as such a cranky old coot, when he is in fact nothing of the sort? Which of these values do you agree or disagree with?

5. Although Ove has some major “disagreements” with the way the world turned out, there are some undeniable advantages to the modernization he finds so hollow. How do these advantages improve Ove’s life, even if he can’t admit it?

6. Parveneh’s perspective on life, as radically different from Ove’s as it is, eventually succeeds in breaking Ove out of his shell, even if she can’t change his feelings about Saabs. How does her brash, extroverted attitude manage to somehow be both rude and helpful?

7. Ove strives to be “as little unlike his father as possible.” Although this emulation provides much of the strength that helps Ove persevere through a difficult life, it also has some disadvantages. What are some of the ways that Ove grows into a new way of thinking over the course of the book?

8. Ove is a believer in the value of routine—how can following a routine be both comforting and stultifying? How can we balance routine and spontaneity? Should we? Or is there sense in eating sausage and potatoes your whole life?

9. The truism “it takes a village to raise a child” has some resonance with A Man Called Ove. How does the eclectic cast of posers, suits, deadbeats, and teens each help Ove in their own way?

10. Although we all identify with Ove to some extent, especially by the end of the story, we certainly also have our differences with him. Which of the supporting cast (Parveneh, Jimmy, the Lanky One, Anita) did you find yourself identifying with most?

11. What did you make of Ove’s ongoing battle with the bureaucracies that persist in getting in his way? Is Ove’s true fight with the various ruling bodies, or are they stand-ins, scapegoats, for something else?

12. On page 113, after a younger Ove punches Tom, the author reflects: “A time like that comes for all men, when they choose what sort of men they want to be.” Do you agree with this sentiment, especially in this context? How does the book deal with varying ideas of masculinity?

13. On page 246, the author muses that when people don’t share sorrow, it can drive them apart. Do you agree with this? Why or why not?

14. What do you think of Ove’s relationship with the mangy cat he adopts? What does the cat allow him to express that he couldn’t otherwise say?

15. On Ove and Sonja’s trip to Spain, Ove spends his time helping the locals and fixing things. How does Ove the “hero” compare and contrast to his behavior in the rest of the book? Is that Ove’s true personality?

16. Ove and Sonja’s love story is one of the most affecting, tender parts of the book. What is the key to their romance? Why do they fit so well together?