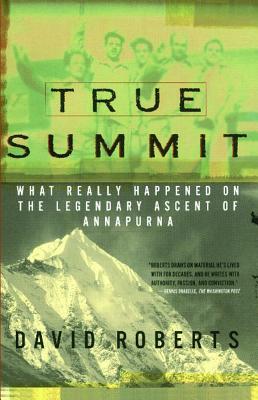 What Really Happened on the Legendary Ascent of Annapurna

In a startling look at the classic Annapurna—the most famous book about mountaineering—David Roberts discloses what really happened on the legendary expedition to the Himalayan peak.

In June 1950, a team of mountaineers was the first to conquer an 8,000-meter peak. Maurice ​Herzog, the leader of the expedition, became a national hero in France, and Annapurna, his account of the historic ascent, has long been regarded as the ultimate tale of courage and cooperation under the harshest of conditions.

In True Summit, David Roberts presents a fascinating revision of this classic tale. Using newly available documents and information gleaned from a rare interview with Herzog (the only climber on the team still living), Roberts shows that the expedition was torn by dissent.

As he re-creates the actual events, Roberts lays bare Herzog's self-serving determination and bestows long-delayed credit to the most accomplished and unsung heroes. These new revelations will inspire young adventurers and change forever the way we think about this victory in the mountains and the climbers who achieved it.

David Roberts is the author of twenty-four books on mountaineering, adventure, and the history of the American Southwest. His essays and articles have appeared in National Geographic, National Geographic Adventure, and The Atlantic Monthly, among other publications. He lives in Watertown, Massachusetts.
Loading...
or support indie stores by buying on