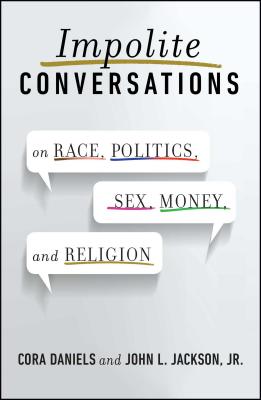 When was the last time you said everything on your mind without holding back? In this no-holds-barred discussion of America’s top hot-button issues, a journalist and a cultural anthropologist express opinions that are widely held in private—but rarely heard in public.

Everyone edits what they say. It’s a part of growing up. But what if we applied tell-it-like-it-is honesty to grown-up issues? In Impolite Conversations, two respected thinkers and writers openly discuss five “third-rail” topics—from multi-racial identities to celebrity worship to hyper-masculinity among black boys—and open the stage for honest discussions about important and timely concerns.

Organized around five subjects—Race, Politics, Sex, Money, Religion—the dialogue between Cora Daniels and John L. Jackson Jr. may surprise, provoke, affirm, or challenge you. In alternating essays, the writers use reporting, interviews, facts, and figures to back up their arguments, always staying firmly rooted in the real world. Sometimes they agree, sometimes they don’t, but they always reach their conclusions with respect for the different backgrounds they come from and the reasons they disagree.

Whether you oppose or sympathize with these two impassioned voices, you’ll end up knowing more than you did before and appreciating the candid, savvy, and often humorous ways in which they each take a stand.

Cora Daniels is an award-winning journalist and the author of two books, Black Power Inc. and Ghettonation. She was a staff writer for Fortune magazine for almost a decade and currently is a contributing writer for Essence. Her work has also been published in The New York Times Magazine, Fast Company magazine, O: The Oprah Magazine, and Men’s Fitness, among others.

John L. Jackson Jr. is a cultural anthropologist, filmmaker, and writer. At the age of thirty-four, he was named the first-ever Richard Perry University Professor of Communication and Anthropology at the University of Pennsylvania, and has served as a visiting professor of law at Harvard. He is the author of four books: Harlemworld, a Publisher’s Weekly Notable Nonfiction Book; Real Black; Racial Paranoia; and Thin Description.
Loading...
or
Not Currently Available for Direct Purchase