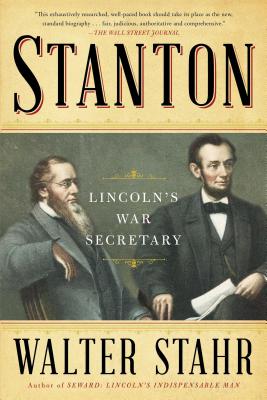 New York Times bestselling author Walter Stahr tells the story of Edwin Stanton, who served as Secretary of War in Abraham Lincoln’s cabinet. “This exhaustively researched, well-paced book should take its place as the new, standard biography of the ill-tempered man who helped to save the Union. It is fair, judicious, authoritative, and comprehensive” (The Wall Street Journal).

Of the crucial men close to President Lincoln, Secretary of War Edwin Stanton (1814–1869) was the most powerful and controversial. Stanton raised, armed, and supervised the army of a million men who won the Civil War. He directed military movements. He arrested and imprisoned thousands for “war crimes,” such as resisting the draft or calling for an armistice. Stanton was so controversial that some accused him at that time of complicity in Lincoln’s assassination. He was a stubborn genius who was both reviled and revered in his time.

Stanton was a Democrat before the war and a prominent trial lawyer. He opposed slavery, but only in private. He served briefly as President Buchanan’s Attorney General and then as Lincoln’s aggressive Secretary of War. On the night of April 14, 1865, Stanton rushed to Lincoln’s deathbed and took over the government since Secretary of State William Seward had been critically wounded the same evening. He informed the nation of the President’s death, summoned General Grant to protect the Capitol, and started collecting the evidence from those who had been with the Lincolns at the theater in order to prepare a murder trial.

Walter Stahr is the New York Times bestselling author of Seward: Lincoln’s Indispensable Man, Stanton: Lincoln’s War Secretary, and John Jay: Founding Father. A two-time winner of the Seward Award for Excellence in Civil War Biography, Stahr practiced law in Washington and Asia for more than two decades. He is an honors graduate of Stanford University and Harvard Law School.
Loading...
or
Not Currently Available for Direct Purchase