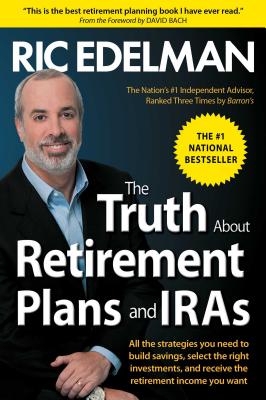 The Truth About Retirement Plans and IRAs (Paperback)

From the #1 independent financial advisor in America, ranked three times by Barron’s: a guide to making the most of your retirement plans and assuring long-term financial security.

Everyone knows that saving for your retirement is important. Yet only half of all eligible Americans contribute to a retirement plan. That’s because all plans—including the 401(k), 403(b), 457, and even the IRA—are complicated, confusing, and costly. New York Times bestselling author and acclaimed financial advisor Ric Edelman has counseled thousands of savers and retirees and has accumulated his advice in this book.

Edelman has created a step-by-step guide. With illuminating prose and simple explanations, he shares everything you need to know as a plan participant: how to contribute even when you think you can’t afford to, how to make wise choices among your investment options, and how to convert your 401(k) into income so you can provide yourself with the lifestyle you want in retirement. Along the way, he debunks the myths and clears up the confusion.

For thirty years, Ric Edelman has worked to teach everyday people about personal finance. He’s widely regarded as one of the nation’s top financial advisors, having been ranked #11 on the 2017 list of the nation’s Top Wealth Advisors by Forbes. He was previously ranked the nation’s #1 Independent Financial Advisor three times by Barron’s. Ric is the 2017 recipient of the IARFC’s Loren Dunton Memorial Award for Lifetime Achievement for his “substantial contribution to the financial services profession and the financial interests of the public.” He is an inductee of Research magazine’s Financial Advisor Hall of Fame, and has been named among the “15 most transformative people in the industry” by Investment News and one of the investment advisory field’s “10 most influential figures” by RIABiz. Ric is also a #1 New York Times bestselling author who has written nine books on personal finance. His most recent, The Truth About Your Future, was published in March 2017. You can visit him at RicEdelman.com.

Praise For The Truth About Retirement Plans and IRAs…

“Earns high marks for clarity, simplicity, and its focus on educating and encouraging readers to be the masters of their retirement fates. What is commonly viewed as daunting subject matter is rendered much more accessible and digestible with the aid of a sage and talented writer. This book deserves the wide following it is sure to receive.”
— Estate Planning
or support indie stores by buying on
Copyright © 2020 American Booksellers Association