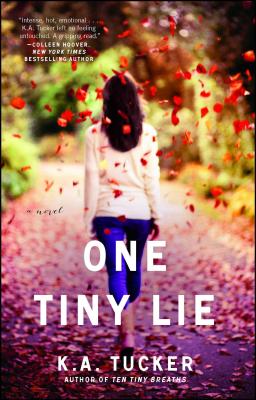 In this follow-up novel to the top-selling Ten Tiny Breaths, Livie Cleary faces a new set of challenges as she navigates freshman year at Princeton, wild parties, and the gorgeous rowing team captain who is everything she doesn’t want in a guy, or so she thinks…

Livie Cleary has always been Miss Perfect—but she soon learns that perfection isn’t all it’s cracked up to be, and finding out who she really is might mean making some mistakes along the way.

“Make me proud.” These were the last words Livie’s father ever spoke to her. In the seven years since her parents’ tragic death, Livie has done her best to live up to this standard through her every choice, word, and action, while looking after her sister with strength and maturity. But with college right around the corner, unexpected challenges will test her resilience—and her heart.

Livie walks into Princeton with a solid plan, and she’s dead set on delivering on it: Rock her classes; set herself up for medical school; and meet a good, respectable guy to someday marry. Her plan definitely does not include Jell-O shots; a lovable, party animal roommate she can’t say “no” to; or Ashton, the arrogant—and extremely attractive—captain of the men’s rowing team who makes Livie’s usually nonexistent temper flare. Worse, he’s best friends and roommates with Connor, who happens to fit Livie’s criteria perfectly. So why does she keep thinking about Ashton?

As Livie finds herself facing mediocre grades, career aspirations she no longer thinks she can handle, and feelings for Ashton that she shouldn’t have, she’s forced to let go of her last promise to her father, and, with it, the only identity she’s ever known.

Praise For One Tiny Lie: A Novel (The Ten Tiny Breaths Series #3)…

"There is so much delicious escapism in K.A. Tucker's One Tiny Lie you may well fake a stomach virus so you can hide out to luxuriate in its angst-ridden love fantasy, a kind of Twilight goes to Princeton...this impassioned romp is to be soaked in and savored, sure to keep any woman warm on a cold winter's night."
— Shelf Awareness (starred review)

"Likable characters, steamy liaisons and surprising plot twists add up to a satisfying romance. Readers will be eager for the next installment."
— Kirkus

"Tucker delivers another emotional and unforgettable read. Livie and Ashton's electrically charged connection will have readers frantically turning pages. Add in the witty and sexually suggestive banter and you've got a recipe for one hot and angsty romance. One Tiny Lie tackles heavy topics, but the balance between the romance, coming-of-age storyline and darker issues is extremely well-done. An absolute must read!"
— Romantic Times (4.5 out of 5 stars)

"K.A. Tucker is a mistress of words, stringing you along with just the right amount of gut-wrenching drama."
— Three Chicks and Their Books