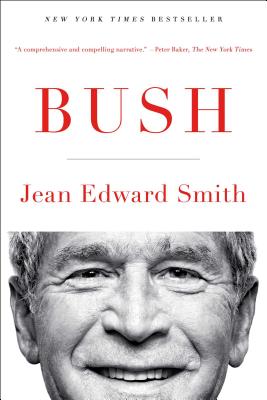 George W. Bush, the forty-third president of the United States, almost singlehandedly decided to invade Iraq. It was possibly the worst foreign-policy decision ever made by a president. The consequences dominated the Bush Administration and still haunt us today.

In Bush, a “well-rounded portrait…necessary and valuable in this election year” (Christian Science Monitor), Jean Edward Smith demonstrates that it was not Dick Cheney, Donald Rumsfeld, or Condoleezza Rice, but President Bush himself who took personal control of foreign policy. Bush drew on his deep religious conviction that important foreign-policy decisions were simply a matter of good versus evil. Domestically, he overreacted to 9/11 and endangered Americans’ civil liberties. Smith explains that it wasn’t until the financial crisis of 2008 that Bush finally accepted expert advice. As a result, he authorized decisions that saved the economy from possible collapse, even though some of those decisions violated Bush’s own political philosophy.

“An excellent initial assessment of a presidency that began in controversy…and ended with the international and domestic failures that saddled Bush with the most sustained negative ratings of any modern president” (Dallas Morning News), this comprehensive evaluation will surely surprise many readers. “Written in sober, smooth, snark-free prose, with an air of thoughtful, detached authority, the book is nonetheless exceedingly damning in its judgments about George W. Bush’s years in office” (The Washington Post).

“Anyone prone to romanticize the old GOP should take a bracing shot of Bush, a hefty biography of our 43rd president by the prolific and acclaimed biographer Jean Edward Smith. Written in sober, smooth, snark-free prose, with an air of thoughtful, detached authority, the book is nonetheless exceedingly damning in its judgments about George W. Bush’s years in office. . . . Authoritative and trustworthy.”
— David Greenberg

"Harsh though the book is, overall it is well-researched, well-written and convincing."
— Morton Kondracke

"A swift and damning judgment on the 43rd president. . . .  Smith writes with a deft sweep and sense of history."
— Ray Locker

"Pulls no punches. . . . A fair, comprehensive and highly readable account of a critical period that is sure to be reassessed by historians over the coming decades.”
— Ray Harkavy

“A thought-provoking book that anybody who wants to understand the opening years of this millennium must read.”
— James M. McPherson, author of Battle Cry of Freedom

“Makes a voluminously detailed — and compelling — case that vindication is unlikely to come for the Bush administration anytime soon.”
— Glenn C. Altschuler

"A well-rounded portrait of Bush as president. . . . Smith’s account is necessary and valuable in this election year.”
— Erik Spanberg

“An excellent initial assessment of a presidency that began in controversy . . . and ended with the international and domestic failures that saddled Bush with the most sustained negative ratings of any modern president.”
— Carl P. Leubsdorf

“Hard-hitting. . . . A shrewd, nuanced view of Bush. . . . Smith embeds this portrait in a lucid, highly readable narrative, balancing rich detail with clear delineation of the larger shape of policy through the chaos of politics. This is a superb recap and critical analysis of Bush’s controversial administration.”
— Publishers Weekly

Jean Edward Smith taught at the University of Toronto for thirty-five years, and at Marshall University for twelve. He was also a visiting scholar at Columbia, Princeton, and Georgetown. He is the author of Bush, a biography of the 43rd president; Eisenhower in War and Peace; FDR, winner of the 2008 Francis Parkman Prize of the Society of American Historians; Grant, a 2002 Pulitzer Prize finalist; and John Marshall: Definer of a Nation.
or support indie stores by buying on