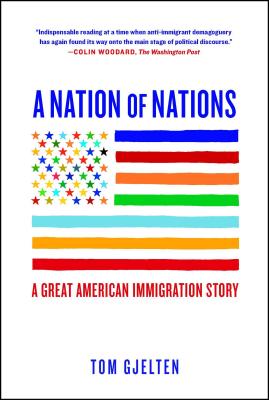 “A stunningly researched, analyzed, and narrated presentation of US immigration history, centered on the pivotal 1965 Immigration and Nationality Act. . . . Gjelten presents the stories of immigrants from El Salvador, Bolivia, Libya, and Korea, gathered through in-depth interviews and research, to make the case for what immigration means today and will mean in the future. . . . An important resource for anyone seeking to better understand US society and the role of immigration in the country's past, present, and future.”
— Choice

Tom Gjelten is a veteran journalist and author of Sarajevo Daily: A City and Its Newspaper Under Siege and Bacardi and the Long Fight for Cuba: The Biography of a Cause. Over a thirty-year career as a correspondent for NPR News, he has covered wars in Central America, the Middle East, and the former Yugoslavia, as well as major national stories in the United States. His NPR reporting has won him two Overseas Press Club Awards, a George Polk Award, and a Robert F. Kennedy Journalism Award. He is a regular panelist on the PBS program Washington Week, a member of the Council on Foreign Relations, and a member of the Editorial Board at World Affairs Journal.
Loading...
or support indie stores by buying on