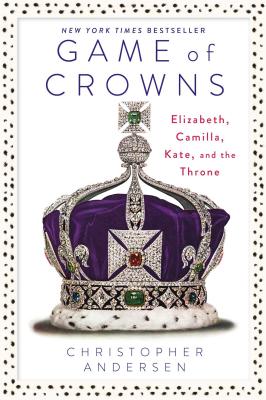 The #1 New York Times bestselling author of William and Kate and The Day Diana Died takes a compulsively readable look into the relationships and rivalries of Queen Elizabeth, Camilla Parker Bowles, and Kate Middleton.

One has been famous longer than anyone on the planet—a wily stateswoman and an enduring symbol of a fading institution. One is the great-granddaughter of a king’s mistress and a celebrated homewrecker who survived a firestorm of scorn to marry her lover and replace her arch rival, a beloved twentieth-century figure. One is a beautiful commoner, the university-educated daughter of a self-made entrepreneur, a fashion idol, and wife and mother to two future kings.

Master biographer Christopher Andersen takes readers behind palace walls to examine the surprising similarities and stark differences among three remarkable women—Queen Elizabeth; Camilla, Duchess of Cornwall; and Princess Kate. Andersen reveals what transpires within the royal family away from the public's prying eyes; how the women actually feel about each other; how they differ as lovers, wives, and mothers; and how they are reshaping the landscape of the monarchy in this addictive read that will shock even those who are spellbound by the royal palace.

Christopher Andersen is the critically acclaimed author of eighteen New York Times bestsellers which have been translated into more than twenty-five languages worldwide. Two of his books—The Day Diana Died and The Day John Died (about JFK Jr.)—reached #1. A former contributing editor of Time and longtime senior editor of People, Andersen has also written hundreds of articles for a wide range of publications, including The New York Times, Life, and Vanity Fair. Andersen has appeared frequently on such programs as Today, Good Morning America, NBC Nightly News, CBS This Morning, 20/20, Anderson Cooper 360, Dateline NBC, Access Hollywood, Entertainment Tonight, Inside Edition, 48 Hours, and more.
Loading...
or
Not Currently Available for Direct Purchase