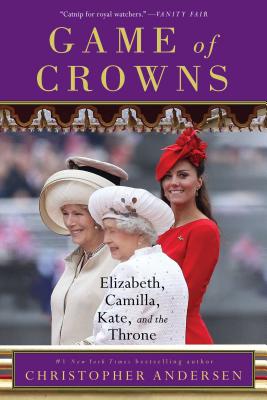 Game of Crowns is an in-depth and exquisitely researched exploration of the lives of these three remarkable women and the striking and sometimes subtle ways in which their lives intersect and intertwine. Examining their surprising similarities and stark differences, Andersen travels beyond the royal palace walls to illustrate who these three women really are today—and how they will directly reshape the landscape of the monarchy.

Christopher Andersen is the critically acclaimed author of eighteen New York Times bestsellers which have been translated into more than twenty-five languages worldwide. Two of his books—The Day Diana Died and The Day John Died (about JFK Jr.)—reached #1. A former contributing editor of Time and longtime senior editor of People, Andersen has also written hundreds of articles for a wide range of publications, including The New York Times, Life, and Vanity Fair. Andersen has appeared frequently on such programs as Today, Good Morning America, NBC Nightly News, CBS This Morning, 20/20, Anderson Cooper 360, Dateline NBC, Access Hollywood, Entertainment Tonight, Inside Edition, 48 Hours, and more.
Loading...
or support indie stores by buying on