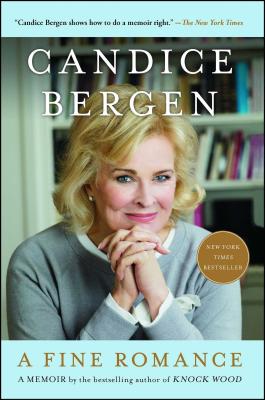 In this New York Times bestseller, acclaimed actress Candice Bergen “shows how to do a memoir right...The self-possessed, witty, and down-to-earth voice that made Bergen’s first memoir a hit when it was published in 1984 has only been deepened by life’s surprises” (The New York Times Book Review).

“Candice Bergen is unflinchingly honest” (The Washington Post), and in A Fine Romance she describes her first marriage at age thirty-four to famous French director Louis Malle; her overpowering love for her daughter, Chloe; the unleashing of her inner comic with Murphy Brown; her trauma over Malle’s death; her joy at finding new love; and her pride at watching Chloe blossom.

In her decidedly nontraditional marriage to the insatiably curious Louis, Bergen takes readers on world travels to the sets where each made films. Pregnant with Chloe at age thirty-nine, this mature primigravida also recounts a journey through motherhood that includes plundering the Warner Bros. costume closets for Halloween getups and never leaving her ever-expanding menagerie out of the fun. She offers priceless, behind-the-scenes looks at Murphy Brown, from caterwauling with Aretha Franklin to the surreal experience of becoming headline news when Dan Quayle took exception to her character becoming a single mother. Bergen tackles familiar rites of passage with moving honesty: the rigors of caring for a spouse in his final illness, getting older, and falling in love again after she was tricked into a blind date.

By the time the last page is turned, “we’re all likely to be wishing Bergen herself—funny, insightful, self-deprecating, flawed (and not especially concerned about that), and slugging her way through her older years with bemused determination—was living next door” (USA TODAY).

Praise For A Fine Romance…

"Candice Bergen shows how to do a memoir right. . . . The self-possessed, witty, and down-to-earth voice that made Bergen's first memoir a hit when it was published in 1984 has only been deepened by life's surprises. . . . As a fictional newswoman, Murphy Brown was iconically brassy. As a memoirist, Candice Bergen is flesh-and-blood classy."
— The New York Times Book Review

“Bergen may not have had Murphy’s sharp elbows or unswerving career focus, but she reveals herself to be just as complicated and sophisticated as her television counterpart—and infinitely more introspective. . . . [A Fine Romance] succeeds in the way a good memoir should. It presents a human life in full—with great glories and heartaches and watercolored memories. Bergen tells her story with humor, confidence and candor. Perhaps she’s not so different from Murphy after all."
— The Washington Post

“A Fine Romance is just that. Candice tells her own story with honesty and humor—a story of loves lost and found, of marriages, joys and heartaches. I am not sure Candice ever realized her own beauty or how well she writes. Well, she is, and she does.”
— Barbara Walters

“Candice Bergen's memoir is moving with the wisdom that only age can bring. The woman you thought had everything has been through more than most of us could bear. Revelatory, anguished, and utterly inspirational.”
— Bette Midler, author of A View from a Broad

"You'll fall for Bergen's A Fine Romance. . . . Her writing and storytelling are superb throughout. . . . With this memoir, we're all likely to be wishing Bergen herself—funny, insightful, self-deprecating, flawed (and not especially concerned about that), and slugging her way through her older years with bemused determination—was living next door.”
— USA Today

“Candice’s book is candid, honest, interesting, and reading it, you love her more than ever.”
— Diane von Furstenberg, author of The Woman I Wanted to Be

“Bergen is a talented and graceful writer—something she first demonstrated in Knock Wood, which chronicled her Hollywood youth and coming of age as the daughter of famed comedian and ventriloquist Edgar Bergen. Her literary voice is enormously engaging, capable of infusing considerable wit and poignancy. . . . She has something real to say here, and one hopes that her journey will continue for many years to come—and that eventually she'll write about that too.”
— Chicago Tribune

“Candy's memoir is intimate and surprisingly candid. We learn, we laugh, we marvel because her voice is as honest, funny, and rapier-smart as Murphy’s. Add in self-reflection and self-deprecation and you have one heck of a great read.”
— Lesley Stahl, 60 Minutes correspondent

“Candy gives us a glimpse into the fascinating world of fame and shares with us the ordinary in the extraordinary.”
— Carrie Fisher, author of Postcards from the Edge and Wishful Drinking

"A surprisingly frank and even bawdy mélange of celebrity fairy tale, marriage confessional and accounting of the mundane."
— The New York Times

"Candice Bergen’s follow-up to her Knock Wood is among the more commendable celebrity memoirs you’ll encounter. . . . Along with writing skill . . . you’ll be impressed with [her] candor and wisdom."
— The Buffalo News (Editor's Choice)

"A Fine Romance is full of heart. Even though Bergen is surrounded by celebrity friends at the turn of every page, it's evident she is about as down-to-earth as they come. There is an honesty in her writing that is both refreshing and encouraging.”
— Associated Press

“Bergen has a way of making readers think they are friends who understand her life and know her dreams and frustrations. The book is forthcoming and refreshingly human.”
— The Examiner

“Bergen’s rapier wit, warm personality and unflinching honesty make these stories of life and love all the more appealing.”
— Bookpage

"With her trademark wit, Bergen leads readers through the highs and lows of her professional and personal life in this entertaining and poignant memoir chock-full of Hollywood cameos. . . . Never afraid to poke fun at herself or celebrity culture, Bergen is as fresh, funny, and biting as Murphy Brown was nearly 30 years ago."
— Publishers Weekly

Candice Bergen’s film credits include The Sand Pebbles, Carnal Knowledge, Starting Over (for which she received an Oscar nomination), and Miss Congeniality. On television, she made headlines as the tough-talking broadcast journalist and star of Murphy Brown, for which she won five Emmys and two Golden Globes. She later starred with James Spader and William Shatner in the critically acclaimed series Boston Legal.
Loading...
or support indie stores by buying on