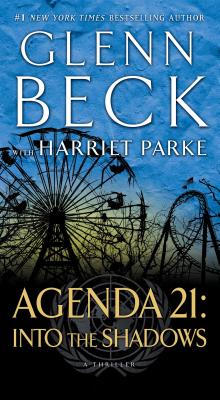 It was once named America, but now it is just “the Republic.” Following the worldwide implementation of a UN-led program called Agenda 21, the once-proud people of America have become obedient residents who live in barren, brutal Compounds and serve the autocratic, merciless Authorities.

Citizens mainly keep their heads down and their mouths shut—but Emmeline is different. When the Authorities took her mother away, she started questioning the world around her. What happened to her mom? Why is everyone confined to grim living spaces and made to eat the same food cubes every day? Why was her own baby taken from her to be raised in the Children’s Village? And are those who got away during the Relocations—the so-called shadow people—merely a rumor?

When Emmeline’s questions lead to the realization that she will never see her child again, she decides to escape the Compound. Fleeing the armed enforcers of the Earth Protection Agency, and facing the unknown for the first time in their lives, Emmeline and her partner David run into the shadows in the desperate hope of finding something they’d only heard stories about from those who’d lived before the Relocations: freedom.

Glenn Beck, the nationally syndicated radio host and founder of TheBlaze television network, has written thirteen #1 bestselling books and is one of the few authors in history to have had #1 national bestsellers in the fiction, nonfiction, self-help, and children’s picture book genres. His recent fiction works include the thrillers Agenda 21, The Overton Window, and its sequel, The Eye of Moloch; his many nonfiction titles include Conform, Miracles and Massacres, Control, and Being George Washington. For more information about Glenn Beck, his books, and TheBlaze television network, visit GlennBeck.com and TheBlaze.com.
Loading...
or support indie stores by buying on