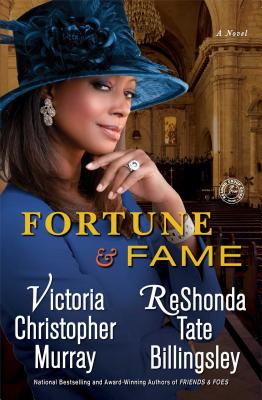 Jasmine Cox, Larson Bush, and Rachel Jackson Adams have been through a lot together—from fighting for their husbands to become the head of the American Baptist Coalition to getting mixed up in a terrible murder. Now the frenemies have found themselves the stars of First Ladies, a much anticipated new reality television show.

Jasmine balks at the idea of airing her dirty laundry on national TV, but Rachel sees it as the perfect opportunity to take her brand to the next level. And if Rachel is in, so is Jasmine. All the cast members are women of God—how much drama can there be?

Rachel and Jasmine know their own pasts are murky, but they’ll seem like choir girls when the secrets and sins of the others come to light. The two will once again have to form an unholy alliance to go up against these so-called Godly women who see the show as their chance to take them down—at any cost.

Victoria Christopher Murray is the author of more than twenty novels including: Greed; Envy; Lust; The Ex Files; Lady Jasmine; The Deal, the Dance, and the Devil; and Stand Your Ground, which was named a Library Journal Best Book of the Year. Winner of nine African American Literary Awards for Fiction and Author of the Year (Female), Murray is also a four-time NAACP Image Award Nominee for Outstanding Fiction. She splits her time between Los Angeles and Washington, DC. Visit her website at VictoriaChristopherMurray.com.

ReShonda Tate Billingsley’s #1 nationally bestselling novels include Let the Church Say Amen, I Know I’ve Been Changed, and Say Amen, Again, winner of the NAACP Image Award for Outstanding Literary Work. Her collaboration with Victoria Christopher Murray has produced four hit novels, Sinners & Saints, Friends & Foes, A Blessing & a Curse, and Fortune & Fame.  BET released a movie in 2013 based on ReShonda’s book Let the Church Say Amen in which she had a minor role. She also had a role in the made-for-TV movie The Secret She Kept based on her book of the same title. Visit ReShondaTateBillingsley.com, meet the author on Facebook at ReShondaTateBillingsley, or follow her on Twitter @ReShondaT.

Praise For Fortune & Fame: A Novel…

“The scandalous characters unite again in Fortune & Fame, Murray and Billinglsey’s third and best collaboration. This time brazen Jasmine and Rachel, who has zero shame, have been cast on First Ladies, a reality TV show that builds one’s brand and threatens to break another’s marriage. Sorry, buttered popcorn is not included.”
— Essence magazine

“Priceless trash talk marks this story about betrayal, greed and stepping on anyone in your way. Best supporting character goes to Mae Frances, who nails all her scenes as a muse for Jasmine. A great choice for folks who spend Sunday mornings in the front pew.”
— Library Journal, on Fortune & Fame

“Frenetic and deliciously slapstick sequel to Sinners & Saints…These frenemies [Rachel Jackson Adams and Jasmine Larson Bush] are drama queens at their best and smartest, a combination that will leave fans praying for their further misadventures.”
— Publishers Weekly

"Writing in an engaging and comfortable style, Murray creates believable women to whom readers will easily relate."
— Library Journal

“Faith-based fiction doesn’t get better than Billingsley’s entertaining soaps, notable for their humor, wonderful characters and challenging life situations that many readers, Christian or not, can identify with.”
— Publishers Weekly
or support indie stores by buying on
(This book is on backorder)
Copyright © 2020 American Booksellers Association