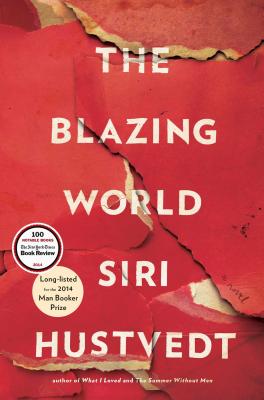 Longlisted for the prestigious Man Booker Prize and hailed by The Washington Post as “Siri Hustvedt’s best novel yet, an electrifying work,” The Blazing World is a masterful novel about perception, prejudice, desire, and one woman’s struggle to be seen.

In a new novel called “searingly fresh... A Nabokovian cat’s cradle” on the cover of The New York Times Book Review, the internationally bestselling author tells the provocative story of artist Harriet Burden, who, after years of having her work ignored, ignites an explosive scandal in New York’s art world when she recruits three young men to present her creations as their own. Yet when the shows succeed and Burden steps forward for her triumphant reveal, she is betrayed by the third man, Rune. Many critics side with him, and Burden and Rune find themselves in a charged and dangerous game, one that ends in his bizarre death.

An intricately conceived, diabolical puzzle presented as a collection of texts, including Harriet’s journals, assembled after her death, this “glorious mashup of storytelling and scholarship” (San Francisco Chronicle) unfolds from multiple perspectives as Harriet’s critics, fans, family, and others offer their own conflicting opinions of where the truth lies. Writing in Slate, Katie Roiphe declared it “a spectacularly good read...feminism in the tradition of Simone de Beauvoir’s The Second Sex or Virginia Woolf’s A Room of One’s Own: richly complex, densely psychological, dazzlingly nuanced.”

“Astonishing, harrowing, and utterly, completely engrossing” (NPR), Hustvedt’s new novel is “Blazing indeed:...with agonizing compassion for all of wounded humanity”(Kirkus Reviews, starred review). It is a masterpiece that will be remembered for years to come.

Praise For The Blazing World: A Novel…

[A]n exuberantly clever piece of work.... [A] novel that gloriously lives up to its title, one blazing with energy and thought.
— The Times

“Larger-than-life Harry reads vociferously, loves fervently, and overflows with intellectual and creative energy….Hustvedt dissects the art world with ironic insight….This is a funny, sad, thought-provoking, and touching portrait of a woman who is blazing with postfeminist fury and propelled by artistic audacity."
— Publishers Weekly

“Intelligent and . . . knowledgeable about the world of modern art, theory, and philosophy, Hustvedt describes in detail the insular world of the New York City art scene.”
— Library Review

Praise for The Summer Without Men

“Exhuberant…Hustvedt is a fearless writer…She’s managed not to shrink the truth of women’s lives, without relinquishing love for men.”
— San Francisco Chronicle

“Engaging…a fragmented meditation on identity, abandonment, and loss….Hustvedt manages to move seamlessly between Blake and Rilke to Kirekegaard and Hegel while maintaining a forward motion to this fluid narrative…Satisfying.”
— Boston Globe

“Elegant… a smart and surprisingly amusing meditation on love, friendship and sexual politics.”
— The Miami Herald

“An investigation into romantic comedy, both the classic Hollywood version—‘love as verbal war’—and Jane Austen’s Persuasion… Among the novel’s pleasures are its analysis of gender…and the character of Mia herself, who comes across as honest, witty and empathetic.”
— New York Times Book Review

“This brisk, ebullient novel is a potpourri of poems, diary entries, emails and quicksilver self-analysis... The noisy chorus in Mia’s head has an appealing way of getting inside the reader’s too.”
— Wall Street Journal

“Breathtaking… hilarious… What a joy it is to see Hustvedt have such mordant fun in this saucy and scathing novel about men and women, selfishness and generosity…. Hustvedt has created a companionable and mischievous narrator to cherish, a healthy-minded woman of high intellect, blazing humor, and boundless compassion.”
— Booklist (Starred Review)

“Intellectually spry… An adroit take on love, men and women, and girls and women.”
— Publishers Weekly

“[A] 21st century riff on the 19th-century Reader-I-married-him school of quiet insurgent women’s fiction… Tart comments on male vs. female styles of writing-and reading-novels are a delight… A smart, sassy reflection on the varieties of female experience.”
— Kirkus Reviews

Praise for What I Loved

“So richly imagined is the art in her book that it serves not just to illuminate hidden emotions but also as a subject in itself. . .A wrenching portrait of parental grief, then a psychological thriller, and finally a meditation on the perspective of memory.”
— Vogue

“A great book. The twinning of narrative pleasure with intellectual rigor isn’t rare. In fact, it’s easy to find if you’re plowing through, say, the Modern Library, engaging with classics that come to you already canonized and annointed. But to stumble into such a relationship with a contemporary. . .writer is a heady feeling. Those of us who read new fiction dream of finding such a book.”
— Newsday

“No image is wasted, no sentence superfluous in creating a novel that teems with ideas, emotions…. Hustvedt’s novel is a quietly astounding work of fiction that defies categorization.”
— Los Angeles Times

“A remarkable achievement of Siri Hustvedt’s prose, with its attention to nuance and intricacy is its demonstration that friendship is a powerful form of intelligence. The book’s final pages acknowledge nearly overwhelming loss, but because the reader understands so much, their sadness feels almost like joy.”
— The Washington Post

Siri Hustvedt is the internationally acclaimed author of a book of poems, six novels, four collections of essays, and a work of nonfiction. In 2012 she was awarded the International Gabarron Prize for Thought and Humanities. Her novel The Blazing World was longlisted for the Man Booker Prize and won the Los Angeles Book Prize for Fiction. She has also published numerous papers in scholarly and scientific journals. She has a PhD in English literature from Columbia University and is a Lecturer in Psychiatry at Weill Cornell Medical College. Her work has been translated into over thirty languages. She lives in Brooklyn, New York.
Loading...
or
Not Currently Available for Direct Purchase