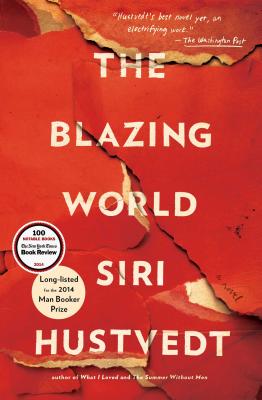 Winner of the 2014 LA Times Book Prize for Fiction

Finalist for the 2014 Kirkus Prize

Hailed by The Washington Post as “Siri Hustvedt’s best novel yet, an electrifying work,” The Blazing World is a masterful novel about perception, prejudice, desire, and one woman’s struggle to be seen.

In a new novel called “searingly fresh... A Nabokovian cat’s cradle” on the cover of The New York Times Book Review, the internationally bestselling author tells the provocative story of artist Harriet Burden, who, after years of having her work ignored, ignites an explosive scandal in New York’s art world when she recruits three young men to present her creations as their own. Yet when the shows succeed and Burden steps forward for her triumphant reveal, she is betrayed by the third man, Rune. Many critics side with him, and Burden and Rune find themselves in a charged and dangerous game, one that ends in his bizarre death.

An intricately conceived, diabolical puzzle presented as a collection of texts, including Harriet’s journals, assembled after her death, this “glorious mashup of storytelling and scholarship” (San Francisco Chronicle) unfolds from multiple perspectives as Harriet’s critics, fans, family, and others offer their own conflicting opinions of where the truth lies. Writing in Slate, Katie Roiphe declared it “a spectacularly good read...feminism in the tradition of Simone de Beauvoir’s The Second Sex or Virginia Woolf’s A Room of One’s Own: richly complex, densely psychological, dazzlingly nuanced.”

“Astonishing, harrowing, and utterly, completely engrossing” (NPR), Hustvedt’s new novel is “Blazing indeed:...with agonizing compassion for all of wounded humanity”(Kirkus Reviews, starred review). It is a masterpiece that will be remembered for years to come.

Praise For The Blazing World: A Novel…

"An exuberantly clever piece of work.... [A] novel that gloriously lives up to its title, one blazing with energy and thought."
— The Times

“Larger-than-life Harry reads vociferously, loves fervently, and overflows with intellectual and creative energy….Hustvedt dissects the art world with ironic insight….This is a funny, sad, through-provoking, and touching portrait of a woman who is blazing with postfeminist fury and propelled by artistic audacity."
— Publishers Weekly

“Intelligent and . . . knowledgeable about the world of modern art, theory, and philosophy, Hustvedt describes in detail the insular world of the New York City art scene.”
— Library Review

Siri Hustvedt, a novelist and scholar, has a PhD in English literature and is a lecturer in psychiatry at Weill Cornell Medical College. She is the author of a book of poems, seven novels, four collections of essays, and two works of nonfiction. She has published papers in various academic and scientific journals and is the recipient of numerous awards, including the prestigious Princess of Asturias Award for Literature, the European Charles Veillon Essay Prize, an American Academy of the Arts and Letters Award in Literature, and the Los Angeles Times Book Prize for Fiction for The Blazing World, which was also longlisted for the Man Booker Prize. She lives in Brooklyn, New York.
Loading...
or support indie stores by buying on