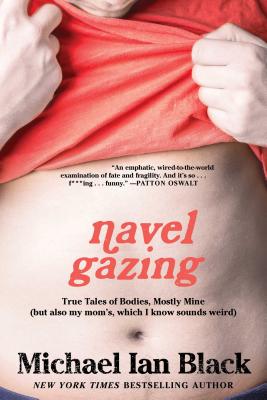 True Tales of Bodies, Mostly Mine (but also my mom's, which I know sounds weird)

Black pulls no punches in this hilariously honest memoir, a follow-up to the acclaimed You’re Not Doing It Right. When Michael’s mother receives a harrowing medical diagnosis, Michael begins a laugh-out-loud examination of health, happiness, and the human body from the perspective of a settled (and sedentary) husband and father of two. With the trademark wit that has made Michael’s other books popular favorites, Navel Gazing is a heartfelt and poignant memoir about coming to terms with growing older and the inevitability of death. It is also a self-deprecating and deliciously frank remembrance of exercise failures, finding out he is part Neanderthal, and almost throwing down with fellow author Tucker Max.

Michael Ian Black may not have the perfect body. Or be the perfect father. Or husband. Or son. But you will laugh as you recognize yourself in his attempts to do better. And, inevitably, falling short. You’ll laugh, you’ll cry, you’ll call your mom.

Michael Ian Black is a writer, comedian, and actor who currently appears on Another Period, The Jim Gaffigan Show, and Wet Hot American Summer: First Day of Camp. He created and starred in many television series, including Michael and Michael Have Issues, Stella, and The State. He wrote the screenplay for the film Run, Fatboy, Run and wrote and directed the film Wedding Daze. Michael regularly tours the country as a stand-up comedian and is the bestselling author of the book My Custom Van (and 50 Other Mind-Blowing Essays That Will Blow Your Mind All Over Your Face), the memoir You’re Not Doing It Right, and the children’s books Chicken Cheeks, The Purple Kangaroo, A Pig Parade Is a Terrible Idea, I’m Bored, Naked!, and Cock-a-Doodle-Doo-Bop. Michael lives in Connecticut with his wife and two children.
or
Not Currently Available for Direct Purchase
Copyright © 2020 American Booksellers Association