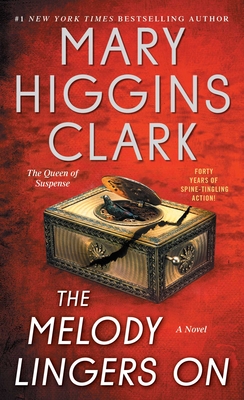 The Melody Lingers On

As the sole assistant to a famous upscale interior designer, Lane Harmon is accustomed to visiting opulent homes. So her latest job at a modest New Jersey townhouse is unusual. Then she learns the home belongs to the wife of disgraced finance magnate Parker Bennett, who vanished two years earlier, along with the five billion dollar hedge fund he managed.

The debate over whether Bennett was suicidal or staged his disappearance still continues. Both his clients and the federal government want to trace the money and find him. But Lane is surprisingly moved by Mrs. Bennett’s steadfast faith in her husband’s innocence. Gradually, Lane is also drawn to the Bennetts’ son, Mark, who is equally determined to prove his father is not guilty. What she doesn’t realize is the closer she gets to the notorious family, the more her life—and that of her five-year-old daughter—is in jeopardy.

The #1 New York Times bestselling author Mary Higgins Clark wrote forty suspense novels, four collections of short stories, a his­torical novel, a memoir, and two children’s books. With bestselling author Alafair Burke she wrote the Under Suspicion series including The Cinderella Murder, All Dressed in White, The Sleeping Beauty Killer, Every Breath You Take, and You Don’t Own Me. With her daughter Carol Higgins Clark, she coauthored five more suspense novels. More than one hundred million copies of her books are in print in the United States alone. Her books are international bestsellers.
or support indie stores by buying on