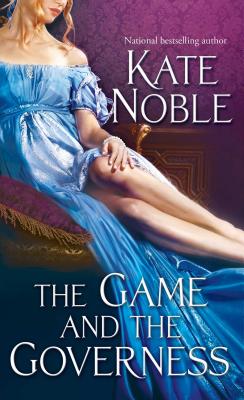 The Game and the Governess (Winner Takes All #1)

Trading Places meets Pride and Prejudice in this sexy, saucy romance—first in a new series from the author of YouTube sensation The Lizzie Bennet Diaries.

The Earl—‘Lucky Ned’ Ashby. Pompous, preening, certain that he is beloved by everyone.
The Miller—John Turner. Proud, forced to work as the Earl’s secretary, their relationship growing ever more strained.
The Doctor—Rhys Gray. Practical, peace-loving, but caught in the middle of two warring friends.

Their wager is simple: By trading places with John Turner and convincing someone to fall in love with him, Ned plans to prove it’s him the world adores, not his money. Turner plans to prove him wrong.

But no one planned on Phoebe Baker, the unassuming governess who would fall into their trap, and turn everything on its head…

Praise For The Game and the Governess (Winner Takes All #1)…

"The subtle development of romance between the devil-may-care earl and the proper former lady is the impetus behind this winning novel, which also boasts rich characters and a deliciously complex story."
— PW Best Romances of Summer

“Noble spins a clever, tremendously entertaining tale of truth and lies, love and friendship.”
— Sarah Maclean for The Washington Post

“Noble's insightful and sometimes pointed observations of character make this story a true delight.”
— All About Romance

“Noble calls her love and laughter romance a blending of Trading Places and Pride and Prejudice. With its refreshing style and wit, one could add a Shakespearean comedy to the list...The charming characters will sweep readers away into the story.”
— RT Book Reviews

“Noble gives her readers an intricate plot and a sizeable cast of characters in a story that is part romantic romp, part moral tale.”
— The Romance Dish

Kate Noble is the national bestselling, RITA-nominated author of historical romances, including the acclaimed Blue Raven series and the Winner Takes All series. Her books have earned her numerous accolades, including comparisons to Jane Austen, which just makes her giddy. In her other life as Kate Rorick, she is an Emmy-award winning writer of television and web series, having written for NBC, FOX, and TNT, as well as the international hit YouTube series The Lizzie Bennet Diaries. Kate lives in Los Angeles with her husband and son, and is hard at work on her next book. You can find Kate online at KateNoble.com.
Loading...
or
Not Currently Available for Direct Purchase