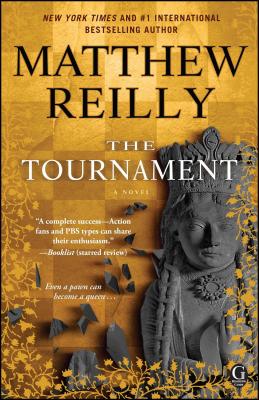 “A complete success…action fans and PBS types can share their enthusiasm” (Booklist, starred review) when a young Queen Elizabeth I is thrust into a gripping game of deception and lust at the height of the Ottoman Empire in this edge-of-your-seat historical thriller from the New York Times bestselling author of The Great Zoo of China and Temple.

The year is 1546, and Suleiman the Magnificent, the feared Sultan of the Ottoman Empire, issues an invitation to every king in Europe: You are invited to send your finest player to compete in a chess tournament to determine the champion of the known world.

Thousands converge on Constantinople, including the English court’s champion and his guide, the esteemed scholar Roger Ascham. Seeing a chance to enlighten the mind of a student, Ascham brings along Elizabeth Tudor, a brilliant young woman not yet consumed by royal duties in Henry VIII’s court.

Yet on the opening night of the tournament, a powerful guest of the Sultan is murdered. Soon, barbaric deaths, diplomatic corruption, and unimaginable depravity—sexual and otherwise—unfold before Elizabeth’s and Ascham’s eyes. The pair soon realizes that the real chess game is being played within the court itself…and its most treacherous element is that a stranger in a strange land is only as safe as her host is gracious.

Matthew Reilly is the New York Times and #1 international bestselling author of numerous novels, including The Four Legendary Kingdoms, The Tournament, The Great Zoo of China, The Five Greatest Warriors, The Six Sacred Stones, Seven Deadly Wonders, Ice Station, Temple, Contest, Area 7, Scarecrow, and Scarecrow Returns, as well as the children’s book Hover Car Racer and the novella Hell Island. His books have been published in more than twenty languages in twenty countries, and he has sold more than 7.5 million copies worldwide. Visit him at MatthewReilly.com and at Facebook.com/OfficialMatthewReilly.