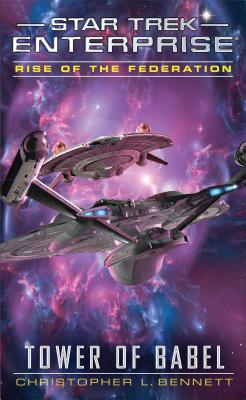 An original novel set in the universe of Star Trek: Enterprise!

The United Federation of Planets has weathered its first major crisis, but its growing pains are just beginning. Admiral Jonathan Archer hopes to bring the diverse inhabitants of the powerful and prosperous Rigel system into the Federation, jump-starting the young nation’s growth and stabilizing a key sector of space. Archer and the Federation’s top diplomats journey to the planetoid Babel to debate Rigel’s admission . . . but a looming presidential race heats up the ideological divide within the young nation, jeopardizing the talks and threatening to undo the fragile unity Archer has worked so hard to preserve.

Meanwhile, the sinister Orion Syndicate recruits new allies of its own, seeking to beat the Federation at its own game. Determined to keep Rigel out of the union, they help a hostile Rigelian faction capture sensitive state secrets along with Starfleet hostages, including a young officer with a vital destiny. Captain Malcolm Reed, Captain T’Pol, and their courageous crews must now brave the wonders and dangers of Rigel’s many worlds to track down the captives before the system is plunged into all-out war.