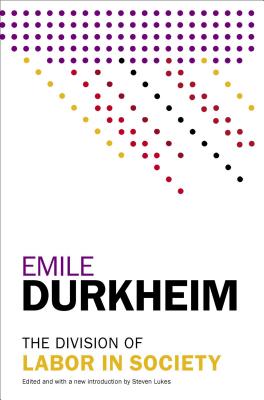 The Division of Labor in Society

Revised for the first time in over thirty years, this edition of Emile Durkheim’s masterful work on the nature and scope of sociology is updated with a new introduction and improved translation by leading scholar Steven Lukes that puts Durkheim’s work into context for the twenty-first century reader.

When it was originally published, The Division of Labor in Society was an entirely original work on the nature of labor and production as they were being shaped by the industrial revolution. Emile Durkheim’s seminal work studies the nature of social solidarity and explores the ties that bind one person to the next in order to hold society together.

This revised and updated second edition fluently conveys Durkheim’s arguments for contemporary readers. Leading Durkheim scholar Steve Lukes’s new introduction builds upon Lewis Coser’s original—which places the work in its intellectual and historical context and pinpoints its central ideas and arguments. Lukes explains the text’s continued significance as a tool to think about and deal with problems that face us today. The original translation has been revised and reworked in order to make Durkheim’s arguments clearer and easier to read.

The Division of Labor in Society is an essential resource for students and scholars hoping to deepen their understanding of one of the pioneering voices in modern sociology and twentieth-century social thought.

Praise For The Division of Labor in Society…

"If one had to choose one foundational text in sociology--this has to be it. Its critique of market society as well as its radical treatment of capitalism's diseases are even more pertinent today than they were a century ago."
— Michael Burawoy

Emile Durkheim (1858–1917) was a French sociologist who formally established the academic discipline and, with Karl Marx and Max Weber, is commonly cited as the principal architect of modern social science.

Steve Lukes is a professor of sociology at New York University. An emeritus Fellow of the British Academy and an editor of the European Journal of Sociology, he is the author of Emile Durkheim: His Life and Work and, most recently, Moral Relativism.
Loading...
or support indie stores by buying on