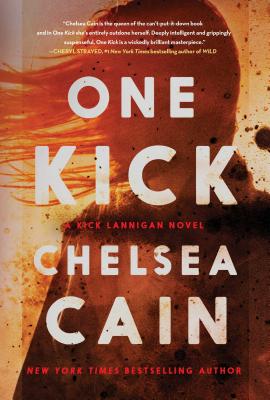 Meet Kick Lannigan. She’s twenty-one. She can pick any lock. She knows five ways to kill you with a jacket. Get ready to fall in love.

From the author of the critically acclaimed New York Times bestselling Archie Sheridan/Gretchen Lowell thrillers: The first in a nail-biting new series featuring Kick Lannigan, a young woman whose complicated past has given her a very special skill set.

Famously kidnapped at age six, Kick captured America’s hearts when she was rescued five years later. Now, twenty-one, she finds herself unexpectedly entangled in a missing child case that will put her talents to the test.

Trained as a marksman, lock picker, escape artist and bomb maker by her abductor, Kick could not return to the life of the average young girl after her release. So, in lieu of therapy, she mastered martial arts, boxing, and knife throwing; learned how to escape from the trunk of a car, jimmy a pair of handcuffs, and walk without making a sound—all before she was thirteen.

Kick has trained herself to be safe. But then two children go missing in three weeks, and an enigmatic and wealthy former weapons dealer approaches her with a proposition. John Bishop uses his fortune and contacts to track down missing children. Not only is he convinced Kick can help recover the two children—he won’t take no for an answer.

With lives hanging in the balance, Kick is set to be the crusader she has always imagined herself. Little does she know that the answers she and Bishop seek are hidden in one of the few places she doesn’t want to navigate—the dark corners of her own mind.

A heart-stopping, entertaining thrill ride, One Kick announces the arrival of a blistering new series by a stunning talent in the thriller realm.

Praise For One Kick: A Novel…

"An unsettling, near-perfect effort by Cain that leaves you eagerly awaiting the next installment."
—Kirkus, starred review

Chelsea Cain is the author of the New York Times bestselling Archie Sheridan/Gretchen Lowell thrillers Heartsick, Sweetheart, Evil at Heart, The Night Season, Kill You Twice, and Let Me Go. Her Portland-based thrillers have been published in twenty-four languages, recommended on the Today show, appeared in episodes of HBO’s True Blood and ABC’s Castle, and included in NPR’s list of the top 100 thrillers ever written. According to Booklist, “Popular entertainment just doesn’t get much better than this.” Visit her online at ChelseaCain.com.