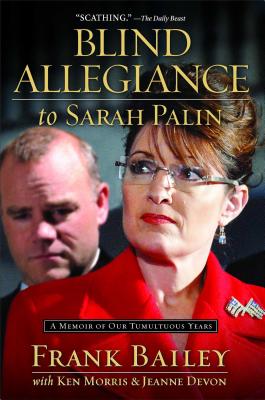 A Memoir of Our Tumultuous Years

This explosive, up-close view of Sarah Palin comes from an inner-circle confidant who shares surprising information about how Sarah dealt with staff and perceived “enemies,” and the discrepancy between what she said and what she did.

Frank Bailey grew up in Kodiak, Alaska. He attended college at Capernwray Bible School in Carnforth, England as well as Moody Bible Institute in Chicago. Frank was the Palin campaign administrator for the successful 2006 primary and general election campaigns. Once elected, Frank became deputy director of the Palin/Parnell transition team and later director of the State of Alaska Office of Boards and Commissions. Frank currently lives in Anchorage with his wife Janeen and their two children. He manages their small family business and serves as the interim music director for Rabbit Creek Community Church. Frank’s passions are his children and writing music.

Following a successful career on Wall Street, Ken Morris became an outspoken critic of aspects of the financial system, including the New York Stock Exchange. He is a frequent media contributor on political criticism and financial reform. He is the author of the novels Man in the Middle and The Deadly Trade. Ken currently lives in California with his wife and four sons and has had the fortune of coaching over forty sports teams over the years for his sons.

Jeanne Devon is the founder of Alaska’s most authoritative and widely read political blog, The Mudflats (www.themudflats.net), a repeat winner of the annual Blogger’s Choice Award. Jeanne is also a regular contributor to The Huffington Post and authored a chapter of Going Rouge: An American Nightmare. Jeanne has two grown stepsons and lives in Anchorage with her husband, son, daughter, dog, and occasional moose.
Loading...
or support indie stores by buying on