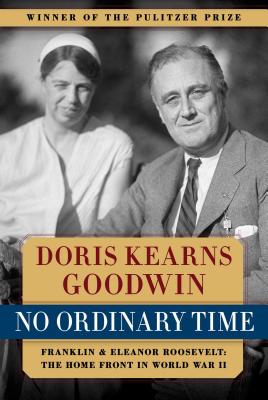 Doris Kearns Goodwin’s Pulitzer Prize–winning classic about the relationship between Franklin D. Roosevelt and Eleanor Roosevelt, and how it shaped the nation while steering it through the Great Depression and the outset of World War II.

Winner of the Pulitzer Prize for History, No Ordinary Time is a monumental work, a brilliantly conceived chronicle of one of the most vibrant and revolutionary periods in the history of the United States. With an extraordinary collection of details, Goodwin masterfully weaves together a striking number of story lines—Eleanor and Franklin’s marriage and remarkable partnership, Eleanor’s life as First Lady, and FDR’s White House and its impact on America as well as on a world at war. Goodwin effectively melds these details and stories into an unforgettable and intimate portrait of Eleanor and Franklin Roosevelt and of the time during which a new, modern America was born.

“Goodwin has pulled off the double trick of making Franklin and Eleanor Roosevelt seem so monumental as to have come from a very distant past, and at the same time so vital as to have been alive only yesterday.”
— The New York Times

“Engrossing . . . No Ordinary Time is no ordinary book. . . . An ambitiously conceived and imaginatively executed participant’s eye view of the United States in the war years. . . . The sheer abundance of colorful biographical anecdotes and the cumulative weight of telling detail sustain an atmosphere of immediacy and leave a lastingly vivid impression.”
— The New York Times Book Review

“The Roosevelt marriage is endlessly gripping because it was so consequential. . . . The reader feels like a resident in the White House.”
— The Boston Globe

“A tale rendered nearly seamless by Goodwin’s skills as a reporter and writer, and by the immense entanglement of her subjects’ private and public lives. How their talents, insecurities, and demons impacted on the country and the world will be much better understood with the publication of this remarkable book.”
— Chicago Sun-Times

“A thoroughly terrific and important work, a valuable addition to Roosevelt literature. . . . Goodwin has deftly reminded us just how extraordinary FDR and Eleanor were in ‘no ordinary times.’”
— San Francisco Chronicle