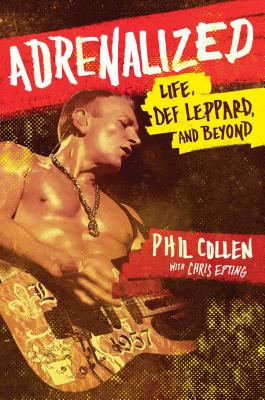 Life, Def Leppard, and Beyond

A revelatory and redemptive memoir from the lead guitarist of the legendary band Def Leppard—the first book ever written by one of its members—chronicling the band’s extraordinary rise to superstardom and how they’ve maintained it for three decades.

Meet Phil Collen. You may know him as the lead guitarist in Def Leppard, whose signature song “Pour Some Sugar on Me” is still as widely enjoyed as when it debuted in 1988. Maybe you’ve heard of him as the rock star who gave up alcohol and meat more than twenty-five years ago. Most likely you’ve seen him shirtless—in photos or in real life—flaunting his impeccably toned body to appreciative female fans.

But it wasn’t always like this. Collen worked his way up from nothing, teaching himself guitar from scratch as a teenager by imitating his heroes. He slogged it out in London-based pub bands for years, long before Def Leppard formed and transformed from unknowns to icons (all thanks to a little album called Pyromania), from playing openers in near-empty arenas to headlining in those same stadiums and selling them out every night. But as Collen discovered, true overnight success is a myth. Like the other band members, he had to struggle and fight his way to the top; in the end, he says, “our work ethic saved us.” Just as it still does.

This is Collen’s story, starting with his first real taste of success and wild rock and roll excess as a member of the seminal glam rock outfit Girl. But once he joins Def Leppard, it’s also an amazing underdog tale featuring a bunch of ordinary working-class lads who rose to mega-stardom, overcoming incredible obstacles—such as drummer Rick Allen losing an arm in a car crash and the tragic death of guitarist Steve Clark, Phil’s musical soul mate, who lost his fight with alcoholism. Featuring personal, never-before-seen photos of Collen and his band mates on stage and off, Adrenalized is a fascinating account of the failures, triumphs, challenges, and rock-hard dedication it takes to make dreams come true.

Phil Collen is the lead guitarist of the legendary rock band Def Leppard. He has been a vegetarian for thirty-one years, alcohol-free for twenty-eight years, and vegan for over four years, busting the myth of the classic rock star stereotype.

Chris Epting is the author of many books, including Led Zeppelin Crashed Here, All I Really Need to Know I Learned from KISS, and Hello, It’s Me—Dispatches From a Pop Culture Junkie.
Loading...
or
Not Currently Available for Direct Purchase