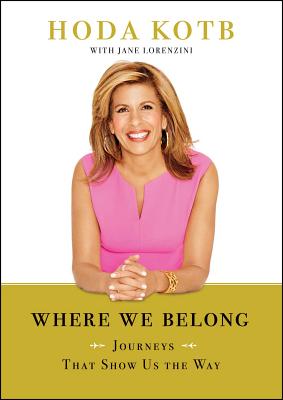 Journeys That Show Us The Way

From New York Times bestselling author and beloved Today show co-anchor Hoda Kotb—inspiring stories of people who find their life’s purpose in unexpected ways, often surprising themselves and the ones they love.

Most of us wonder what we’re doing. We float around in the glass half-empty, gaze out into the world of possibilities, and wonder if we should get off of our raft and climb out. Maybe even today you asked yourself: Is it too late to do that thing that made me so happy when I was young? Could what matters most to me finally be the center of my life? Can I really trust this yearning voice in my head and longing in my heart? Do I feel like I’m where I belong?

In this incredible collection of stories, Hoda Kotb writes about individuals who realized their path in life was either veering off in a completely new direction or was getting too far off course from where they knew they belonged. By following their passions, their gut, and their heart, these people learned how fulfilling life could truly feel. From the investment banker who became a minister after years of working on Wall Street, to the young woman from a blue-collar background whose passion took her to Harvard Medical School, to the high-powered PR exec who found herself drawn to a pioneering residential community, to a “no-kids” guy who now helps children all over the world, the stories in Where They Belong come from an array of ordinary individuals who have discovered the power of embracing change or fighting for a dream. Hoda also interviews celebrities, such as producer Mark Burnett and actress/producer Roma Downey, comedienne Margaret Cho, and former boxer Laila Ali, all who’ve pursued their passions to find fulfillment.

With examples of perseverance, self-reflection, and new attitudes on life, Where They Belong is a motivating and inspirational look at exploring and finding the right path for your personal journey.

Praise For Where We Belong: Journeys That Show Us The Way…

“A thoughtful and inspiring book.”—Savannah Guthrie

“It’s such a great book…there’s a universal quality to these stories.”—Kathie Lee Gifford

“I thought the book was fabulous.”—Steve Harvey

“The book is filled with these great and wonderful reminders of the capacity of a human being to overcome incredible adversity…A great, great, great reminder of a great country and a great people, and [Hoda] is one of them.”—Mike Huckabee

“I love the book.”—Wendy Williams

“Ten Years Later: Six People Who Faced Adversity and Transformed Their Lives, stands out as a wrenching, heartfelt inspiration to better yourself in 2013….These stories could easily tip over into maudlin territory, but Kotb’s journalistic skills and her co-author and pal Jane Lorenzini’s voice keep the tone smart and gripping.”—Fastcompany.com

“Sobering and inspiring tales in their own right, Kotb’s journalistic acumen makes this collection all the more moving.”—Publishers Weekly

“Perfect for anyone who needs a boost.”—PGBLifestyle.com

Hoda Kotb was named co-anchor of the fourth hour of Today in 2007. She has also been a Dateline NBC correspondent since 1998 and is a New York Times bestselling author for her book, Hoda. The three-time Emmy winner also won the prestigious 2006 Peabody Award, the 2003 Gracie Award, and the 2002 Edward R. Murrow Award. Her most recent book is Where We Belong, and she resides in New York City.
Loading...
or
Not Currently Available for Direct Purchase